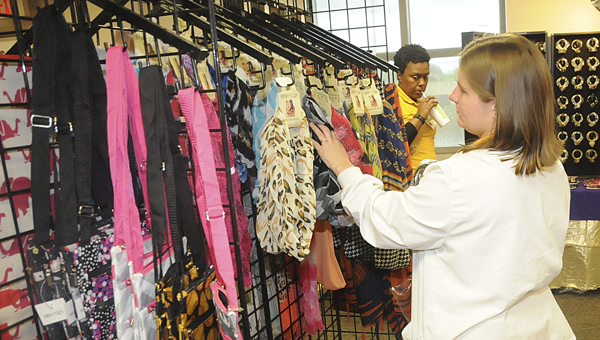 The Vaughan Regional Medical Center Auxiliary held its annual Masquerade Jewelry Fundraiser Thursday and welcomed hundreds of customers that were looking to add some glitz and glam to their wardrobe.

The group hosts the fundraiser in April and November each year. Items available at the sale include a large variety of jewelry, scarves, purses, umbrellas, hats and more.

Auxiliary President Martha Plummer said the group has been holding the fundraiser for at least 15 years and gets a great turnout each time.

“Most of the money we raise from the fundraiser goes to scholarships we give and other projects we do for the hospital,” Plummer said.

In the past, the auxiliary has renovated and added new areas to the hospital, including a mom’s lounge and breast-pumping room, as well as additions to the hospital’s chapel and cafeteria.

Plummer said the groups have plans to renovate in the radiology department next.

There was consistent traffic from crowds of customers who piled in to buy goods.

The sale offered watches, rings, Auburn and Alabama football paraphernalia and other knickknacks for men.

Wendy Moxlennox said she has been coming to the Masquerade Jewelry Sale for about 13 years.

“The sale has good, quality items that last and offers a bunch of different things. If I was to go some other places and buy something for $5 it breaks, but when I come here and spend the same, I don’t have to worry about that,” Moxlennox said.

She said she also likes the fact that much of the jewelry is trendy, up-to-date and in style.

“It’s cute and cheap. I can buy several different things here,” Moxlennon said. “Instead of spending $30 for one thing somewhere else, I can get many pieces here at the same price.”

Steve Lay works with the Masquerade Fundraising Company, which provides all goods that are sold.

“We are a premier fundraising company. We have about 50 teams, and we do this all over the country,” Lay said. “We have three teams in Alabama. The company works with hospitals, we work with the volunteer services and they get a percentage of what we sale.”

He said the company usually holds sales twice a year at each hospital, but some ask for three a year.

“I think it’s a win, win situation for everybody. It gives people who are in the hospital a break so they can come down and shop,” Lay said.

The last day for the sale is Friday.