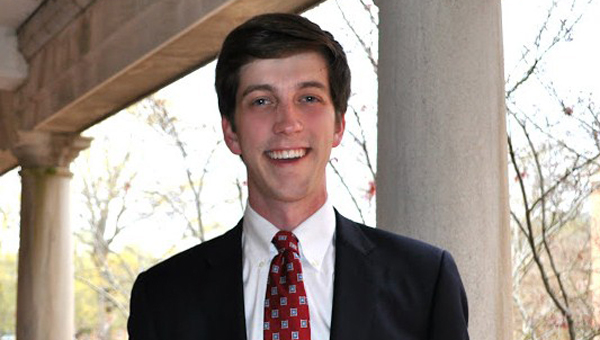 Selma native Porter Rivers has had a passion for student government since his early years at Morgan Academy. Now the 21-year-old finance major is continuing that passion as newly elected Student Government Association (SGA) president at Samford University.

“I want to be a voice for people who don’t feel like they have a voice,” Rivers said.

During his time in Selma, he served on Morgan’s student government from seventh until 12th grade, and was SGA president his senior year. He also played basketball, participated in the Selma-Dallas Youth Leadership Class and was 2013 Boy of the Year.

River’s father, Scoop, said when River’s high school career was over, his son knew exactly where he wanted to go for college.

“I think first of all, Porter, he knew the first time he stepped foot on the Samford campus that it was the place he wanted to attend college,” Scoop said. “It’s such a great school and a beautiful campus and he just really loves being there.”

“He loves being in that leadership role,” said his mother, Betty.

Last year Porter ran for SGA president but lost by a close tally. He tried again this year and won in a record-setting year for amount of total students who voted. Roughly 1,500 students voted in the election.

“It was fun to watch him campaign. He works so hard and he just worked hard to get the support of his fellow students,” Scoop said.

Rivers said he has learned a lot from last year’s election and used that knowledge to help him this time around. Last year he only focused on marketing his campaign to people he directly knew. This year he expanded his efforts; recruiting the help of his friends to spread the word of his campaign to people they know.

“I couldn’t have done it without the people who were supporting me,” Porter said.

Rivers said he is looking forward to working with new faces and serving his fellow students.

“Really, I just wanted to be a change on campus and a voice for students,” Porter said.