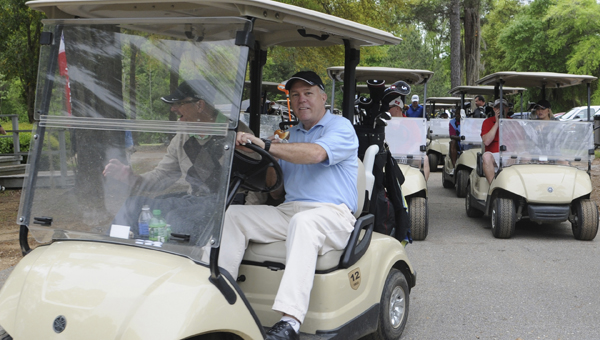 The name of the game is three-man scramble with the ultimate goal to help fund cancer research.

The first place team won $600, second place was awarded $400, and third place earned $240. Longest drive and closest to the pin winners were each given bagged prizes.

The real prize for the golfers, however, was being able to contribute green to cancer research while on the green.

“That’s our big thing, the research. We are trying to [help] find a cure for cancer,” said event leader Alvin Craig.

Birmingham resident Mark Rice has been playing golf for 50 years, but Wednesday was his first time playing for the tournament.

“It’s certainly a great cause and something we can do to give back and help the organization with whatever needs they have,” Rice said. “I’ve never played the golf course so I’m looking forward to looking at the golf course and seeing how it plays.”

Registration for the tournament began at 9 a.m. Just after 11 a.m., golfers loaded their gear onto golf carts before departing for their starting hole. The team registration cost $240 or $80 per person. Holes could be sponsored for $200. In addition to sponsorship and registration fees, mulligans were sold for $5 each and two per player.

“Mulligans are for people like me who don’t play very well, they get a redo shot,” Craig said.

The Vaughan Regional team is one of the many teams in Dallas County working competitively to raise money for research. Each team tries to raise more money than the others, but is collectively working toward a $100,000 county goal.

The county’s earnings will be collected during a night called Bank Night on April 21 to determine winning teams as well as determine a total.

On April 22, the annual Relay for Life will be held at the Selma Lions Club.  For more information about the American Cancer Society, visit cancer.org.