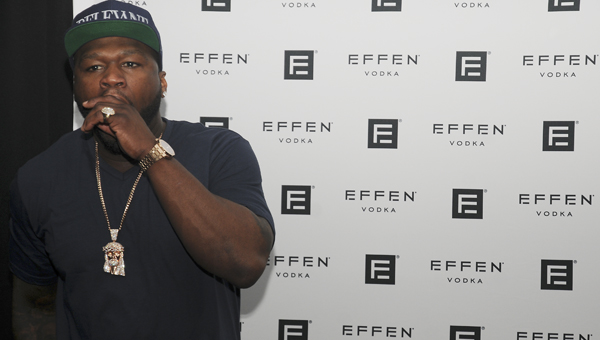 Rapper “50 Cent” visited Johnny’s Package Store in Selma Wednesday to promote his vodka line. He was available to take photos with the public and sign vodka bottles. — Justin Fedich

Hundreds of area residents lined up at the store to purchase bottles with Jackson’s signature and also got a chance to take pictures with the rapper.

Jackson also had appearances scheduled in Montgomery, Birmingham and Fairfield.

Camelle Posey said she was ecstatic to see Jackson and glad he came to Selma, if just briefly.

“I feel excited. My favorite song is ‘21 Questions.’ He could have gone anywhere and he came to Selma. He was a nice guy. I’m glad I met him,” Posey said.

Maine Brock is a Southern Wine and Spirits broker for Beam Suntori, the company that owns the vodka line 50 Cent has endorsed.

“It was key for him to come to Selma and promote it here. For people to come out in the rain like this, it has been a very successful trip,” Brock said.

Rodney Drake works alongside Brock as a broker for the same company. He said 50 Cent will be traveling to across the country on the promotional tour.

“He is promoting the vodka across the country. Alabama is just one on the tour of probably 30 or 40 states he will be in this year,” Drake said.

Mike Patel and Mayan Patel are the owners of Johnny’s Package Store and said they believe the celebrity’s appearance was a good thing for the store. They had promoted the event for several weeks ahead of the visit.

“We’re glad to have him here. We were fortunate to get him to come to our package store. It’s good for Selma,” Mike said.

Jackson became one of the world’s best-known rappers in the early 2000s with his first major-label record “Get Rich or Die Tryin’,” which included the No. 1 singles “In da Club” and “21 Questions.”

Jackson has fallen on harder times recently and has submitted a $23 million plan to get out of bankruptcy.

The rapper has an endorsement deal with Effen Vodka, which is made in Holland. A limited edition bottle of the premium liquor was released earlier this year.