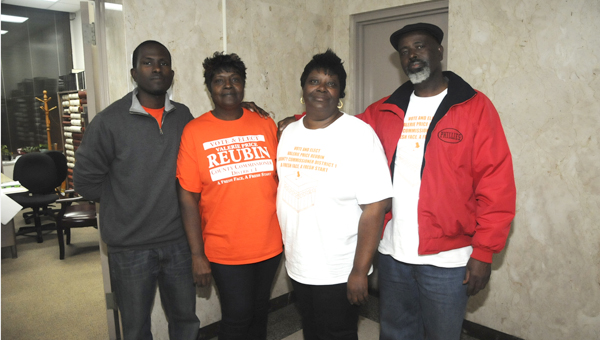 From left to right are Daron Reubin, Clarice Rubin, Valerie Reubin and Henry Price after Valerie learned she won the position as the next District 1 county commissioner. –Chelsea Vance

Valerie Reubin will serve as the new County Commissioner for District 1 after edging Connel Towns, who has served in that role for the last 15 years, in a run-off election.

Reubin received 703 of the 1,359 votes (51.7 percent) and Towns had the other 656. Towns held a lead the majority of the night, but Reubin received 132 of the 143 votes from her home polling station of Minter — the last votes tallied Tuesday — to pull out the win.

With the victory, Reubin said she becomes the first woman to ever be a Dallas County commissioner.

“Dallas County is a historical place, and I have added to that history,” Reubin said.

She lost her husband Daniel in March, but said she campaigned through it.

“I know this was something he would still want me to do. I know he would want me to continue,” Reubin said. “I think losing him had a big impact. I just couldn’t give up. I had to keep running the race.”

Reubin has two main goals she would like to reach during her tenure in office: Incorporate programs for youth across the county and form committees for every community so that she can stay updated on what each area needs.

“The main thing is to see what the people want. I would like to get all of these committees together and hear the ideas of the people. I want to become working partners with the other commissioners, Judge Ballard and city officials,” Reubin said.

Reubin said she would reach out to Towns to hear some of his ideas and seek advice.

“People can expect me to do what I said I was going to do during my campaign. I will work for all citizens in Dallas County,” Reubin said.

Towns said he feels a sense of relief from the results of the election. He said if he had won, it would be the last term he served and he had no plans of running again.

“I have worked in the community to try to do everything possible to bring it up to standards,” Towns said.

Overall, he said he wanted to wish Reubin good luck.

“I would like to wish her the best in her four years as commissioner and bring her up to speed with things in the community she would be taking over in her new position,” Towns said. “I hope her term is successful. If she needs any guidance and support I would be willing to give it to her.”

Reubin will take office in late November after the general election takes place. She will serve a term of four years.