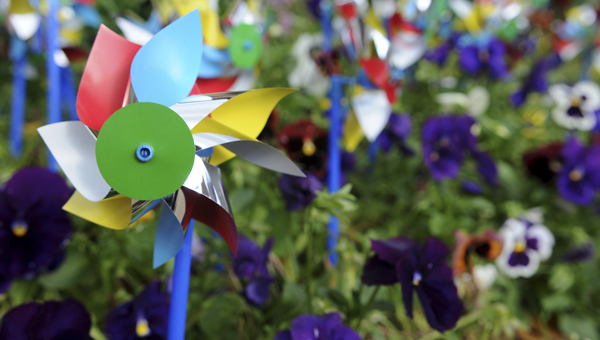 The Central Alabama Regional Child Advocacy Center hosted Plant A Pinwheel Garden on Tuesday. The public was invited to plant pinwheels outside City Hall to raise awareness for child abuse. Each pinwheel represented a child in Dallas County who underwent investigation for abuse or neglect. –Emily Enfinger

Tucked away in the flower gardens and lining the lawns of City Hall are hundreds of colorful pinwheels to raise awareness for child abuse.

“We use them to symbolize the positive things about childhood and to highlight the fact that every child should have a wonderful childhood,” said Central Alabama Regional Child Advocacy Center executive director Laurie Cothran.

In 1983, President Ronald Reagan proclaimed April as National Child Abuse Prevention Month, according to childwelfare.gov. In recognition of the month, the advocacy center has organized the event for the past three years.

In just a matter of minutes, 408 pinwheels were placed with the assistance of over a dozen helpers.

Each pinwheel represents a child in Dallas County whose case was investigated. The garden will remain at City Hall until the end of the month.

“It creates a sense of awareness. For those who see them they ask, ‘What do those mean?’” he said. “It’s happening all over America and certainly here in Selma and Dallas County. We want to bring attention to [child abuse] and want people to be more competent of the fact when we see these type of things to report it.”

The advocacy center serves Bibb, Dallas, Hale, Perry and Wilcox Counties, providing locations for child protection agencies to interview children who may have been abused or neglected.

In 2013, Alabama had 19,961 referrals for child abuse and neglect and 19,715 of those reports were referred for investigation, according to the Child Welfare League of America’s Alabama’s Children 2015 report. That same year, 8,809 children were victims of abuse or neglect in the state, according to the report.

Evans believes bringing awareness to child abuse is crucial because it can affect children later in life.

“Abuse can change their whole life in terms of their future, their career, what they want to be in life,” he said.

The advocacy center will be hosting the next pinwheel garden planting on Thursday at the Bibb County Courthouse front lawn beginning at 4:30 p.m. The event is free and open to the public.

Pinwheels will be provided.