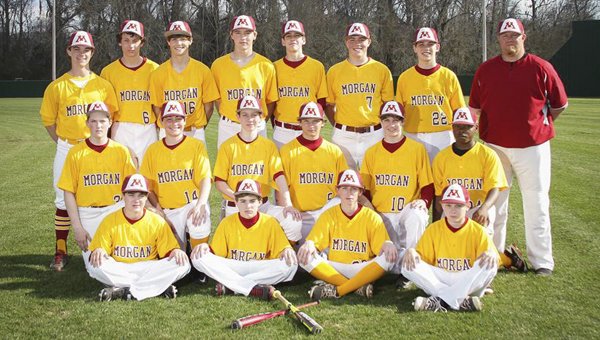 The Senators ran through their first three games of the tournament undefeated, but lost to Pike Liberal Arts to set up a winner-take-all championship game. With the title on the line, Morgan defeated Pike 7-6 to win the first baseball championship in Morgan Academy history.

“For them to fight through that loss to win the tournament, that shows loyalty and great leadership that they have and some composure that is hopefully going to take them on to the varsity level,” said Morgan coach Jeremy Carter.

The Senators defeated Lee-Scott 7-0 to open the tournament Thursday and also had no problem in a 6-1 victory over Edgewood. In the semifinals on Saturday, they squeaked out a 5-4 win over Clarke Prep. In their first chance to win the championship, the Senators lost 4-2 to Pike Liberal Arts.

“We always talked about being a family,” Carter said.

“I left them with a quote. I said, ‘if it’s important to them, they’ll find a way to win, but if it’s not then they’ll find an excuse.’”

The Senators showed the championship was important to them. Morgan pitcher Pierson Atchison picked up his second win of the tournament in the championship game. He also had a save against Clarke Prep.

“He did his job,” Carter said.

The Junior Varsity State Invitational — the tournament’s official name — included 10-teams and was hosted by Macon East. The Senators used a consistent lineup to outlast the field.

Brayton Brown went 8-for-11, Milam Turner for 4-for-15, Gunnar Henderson was 4-for-11, Xavier Green was 5-for-12, Matthew Davis was 6-for-11, Jacob Peavy was 3-for-14, Hardin Utsey went 3-for-12 and Joseph Estes was 2-for-7. Morgan had a ceremony in front of the school Monday morning, but Carter said the plan is to hold another celebration for the team later this school year.

Morgan finished the year at 17-2. The Senators only other loss this season came to Hooper Academy.

“I couldn’t be any happier for these kids to win the first state championship,” Carter said. “We’ve come a long way since I took over four years ago and we’re getting better every year and that’s the good thing.”