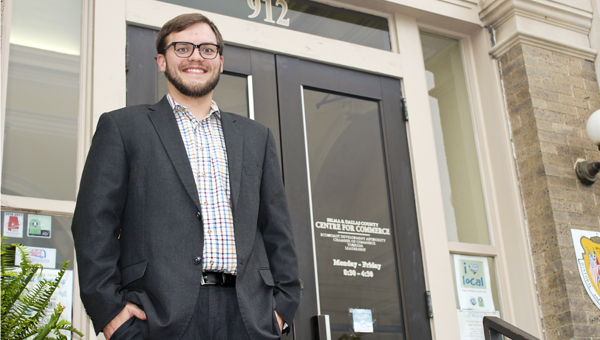 Landon Nichols has joined the Selma and Dallas County Chamber as a destination and marketing consultant.

A Selma native will come home to help promote the city where he was born and raised.

Landon Lee Nichols has accepted the position of destination and marketing coordinator with the Selma and Dallas County Chamber of Commerce.

He has already started working in the position on Mondays and Fridays while he finishes his master’s degree in public administration at the University of Alabama. He will start work full-time May 16.

After attending Morgan Academy and graduating from Meadowview Christian School, Nichols earned a bachelor’s degree in advertising from UA in 2014.

He then returned for graduate school and was accepted into The Blackburn Institute, a leadership development organization with a focus on the state of Alabama.

Nichols said he had visions of moving to a big city — possibly working in politics in Washington, D.C. — but the closer he got to graduation, the more he thought about returning to Selma.

“We have so many new projects, opportunities. It’s a really great time to come home,” Nichols said.

Nichols said his time in The Blackburn Institute helped him make the decision to come back to Selma.

The institute is named after John L. Blackburn, who was instrumental in the school’s racial integration.

“It was founded to create student leaders in their communities. That mission has really resonated with me,” Nichols said.

In his role with the Chamber, Nichols will work in tourism and help market the Chamber.

“I’ll be encouraging people to come to Selma and hosting them while here,” Nichols said.

He will also help with digital initiatives, including the Chamber’s website, social media site and e-newsletters.

“We are in the 21st century, it was time for us to reevaluate the position and direction of the Chamber,” said Chamber executive director Sheryl Smedley. “This is what was presented to the board.”

Smedley said the Chamber board approved the new position and job description. Ashley Mason stepped down as tourism director in August to go to work for the Morris Agency.

Nichols is the son of Lee and Candy Nichols. Lee works for Moore Stewart Ford and Candy is an educator in the Dallas County School System.

CORRECTION: The story has been corrected to reflect Nichols’ title as coordinator and not consultant.