Softball coaches relying on one pitcher to do it all 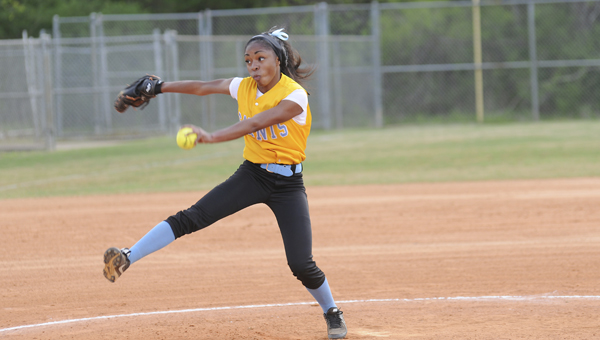 Selma’s Dajah Thrash winds up for a pitch in a game against Dallas County Wednesday at the Sportsplex. — Justin Fedich

While some softball teams in Selma-Dallas County are winning more than others, nearly every team around the area has something in common: reliance on one pitcher to get the job done each game.

It’s common practice in all levels of baseball and softball to have a pitching rotation, in which one pitcher will pitch one game and rest at least one game afterward. Many of the softball teams in Dallas County don’t have that luxury, however, as coaches trust only one pitcher on their roster to pitch from start to finish each game.

While all coaches would like to have an alternative option, each coach has trust in their pitcher that she will be able to be successful each game.

“Tori has earned the right to receive the ball each game as long as she’s healthy enough to pitch,” Dallas County softball head coach Willie Moore said of his senior pitching ace Tori Hatfield after she turned in a 13-strikeout performance Wednesday against Selma.

While Moore said Hatfield has earned the privilege to start every game, he also admits she’s the only one he trusts to start. He said Hatfield never complains about all the pitches she throws, and he believes she can stay healthy all season.

After a 9-4 win against Selma Wednesday, he didn’t shy away about who his pitcher would be the next day.

“She’ll be right back out there tomorrow. She’ll give us a chance. We’ve just got to give her some run support,” Moore said.

Pitching on the other side of that game was Dajah Thrash, another pitcher who is relied on each game to start from opening pitch to closing inning. Selma head coach Jameria Johnson said Thrash will get tired, but she will do her best not to let fatigue show during a game.

After Thrash was hit in the thigh from a line drive at the mound in the first inning of Wednesday’s game, she stayed in the game. Johnson said that it was partially because of Thrash’s toughness and willingness to keep going, but also partially due to the lack of a viable replacement.

Johnson said she knows injury is possible with the amount of pitches Thrash will throw throughout the season, but she and her staff do their best to make sure any potential injury from overexertion is prevented.

“We have to keep her arm iced up, but for her to be the only pitcher, she does a great job,” Johnson said.

Meadowview Christian head coach Cherie Grimes also said she only feels comfortable with one pitcher on her roster, Shelby Boswell.

“We only really have one pitcher and one catcher,” Grimes said.

On Saturday at a softball tournament hosted by Meadowview Christian, Boswell pitched three games in one day. Grimes said that while that was heavy workload for Boswell, asking Boswell to pitch every game isn’t too much of an issue since Meadowview generally only plays once a week.

“She can handle it. She’s tough,” Grimes said.

Each coach admires the toughness their players have and their desire to give more than they might be asked to give on a team with more pitching depth.

While starting the same pitcher each game could bring about a higher risk of injury to that pitcher, it also gives the coaches a sense of comfort knowing their best pitcher is taking the mound each game.