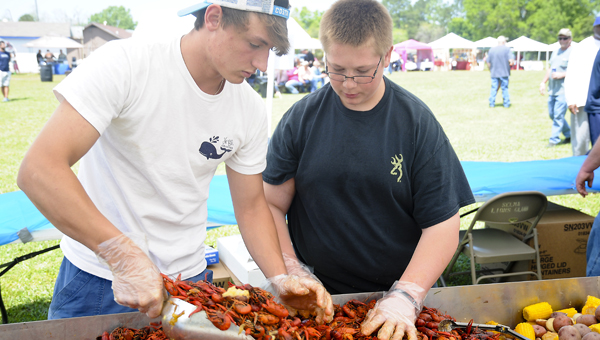 Patrick Haskell, left, and Tyler Duncan, right, work together to scoop a load of crawfish to serve during the Central Alabama Crawfish Festival, which was held Saturday at Lions Fair Park.

Not even two hours into the second annual Central Alabama Crawfish Festival, Lions Fair Park was filled with people and activities. The festival’s executive director, Russell Haskell was proud to see so many people show up so early to the event.

“It’s kind of an overwhelming feeling that people can come together and have fun,” Haskell said.

The festival, which lasted from noon – 8 p.m. Saturday, had something for everyone. Arts and crafts vendors selling homemade candles, gourds and other items lined the outskirts of the park. Children jumped on trampolines and rode a train around the park, while music from three different artists serenaded the festival attendees.

The money raised went to the Selma Lions Club, which provides eye care and glasses for those in need.

The main, attraction, however, was the crawfish. For $10, customers were treated to a heap of crawfish, with a side of red potatoes and corn on the cob.

Brook Ross and his co-workers from Ross and Company Construction bought crawfish hats on Amazon and helped boil crawfish throughout the day. Ross said his favorite part of boiling crawfish is when it’s all done and he can break the tail off and eat the crawfish he just made.

Throughout the day, live country music played on stage. Marcus Frazier opened the show. He was followed by Shelby Brown, and Anthony Orio played the nightcap.

Brown, a native of Elberta, was a semi-finalist on season 9 of NBC’s hit show “The Voice.” She said she has been playing and singing since she was 11.

Brown said she was excited to be in Selma playing for a crowd she hadn’t played for before. On Saturday, the 17-year-old musician unveiled one of her original songs to the public for the first time.

“Not everyone knows me. Some people recognize me from “The Voice,” but other than that, this is an opportunity to gain more fans,” Brown said.

Whether people were visiting Selma for the first time or were lifelong residents of Selma, Haskell said he was happy to see a strong turnout. He said he created the event last year because he thought there was a need in the community to have a family-friendly event to bring everyone together. On Saturday, he said he accomplished just that.

“I was born and raised here. I’ve never left,” Haskell said. “I’ve lived here my whole life and it makes me feel good when the citizens of Dallas County patronize your events. Let’s keep them coming back for next year.”