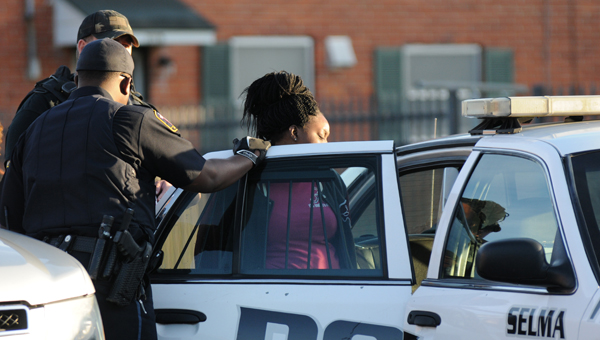 Multiple law enforcement agencies formed a task force to conduct random raids this past Thursday and Friday. The raids will continue in the weeks to come.

In an effort to clean up the crime in Selma, local and regional agencies have joined together for a Selma task force.

“We don’t want this place to change into a little Chicago,” said District Attorney Michael Jackson. “We got some real gangsters in Selma. Those folks don’t mind killing people.”

“Those two are very well known in the community,” Jackson said. “These to gang members were basically running [the GWC] area.”

Both are held with no bond, according to Jackson, at the Dallas County Jail.

A bond hearing will be held later next week.

The others were sent to Mobile on federal charges.

The raid continued Friday. The task force raided several problem areas such as GWC Homes, Craig Air Force Base, Selmont and other areas.

Friday’s sweep was much slower than the night before, with at least on arrest made on unlawful possession marijuana, according to Lowndes County Sheriff’s Department Cpl. Jeremy Marvin.

“We don’t make any discrimination. Anybody body we see out we are going to stop, ask for their ID, check for warrants,” Marvin said.

Lowndes County Sheriff’s Department deputy Eric Jackson said although Friday night was much slower than the night before, the sweeps are still effective for the community.

“Just the pure show of force of law enforcement coming together to help them out. I think those law-abiding citizens who saw us out there working really appreciated it,” Eric said.

Jackson said the task force was created last year to clean out Selma after a string of crimes around March.

He said the force was organized again this year for the same reason.

“Now we’re back where we were last year, we want to clean up this area, this whole community,” Jackson said.