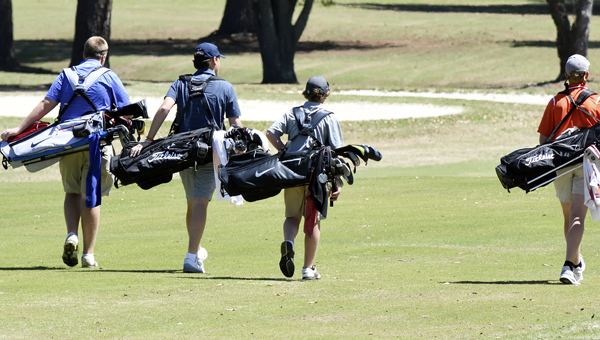 As he handed out awards Thursday afternoon, Morgan Academy golf coach Ira Wagoner joked that the Morgan Academy Invitational should be renamed in honor of Lee-Scott Academy. It was easy to see why.

A total of 91 players from schools all over the state took part in Thursday’s invitational at the Selma Country Club. Wagoner said it was the largest field for any Alabama Independent School Association tournament this year and by the time it was over, it was clear everyone is playing catch-up to Lee-Scott.

Teams from Lee-Scott finished first and second in the team competition and the Warriors also swept the tournament’s four individual awards. Lee-Scott’s team of David Thompson, Turk Petit, Matthew Hall, Conner Reid and Harrison Fleming combined for a score of 298 — the only sub-300 score of the day.

Glenwood Academy was third after a score of 328 and Morgan Academy came in fourth with a 331. Jones Free led the way for the Senators with a 78 and Thomas Morris was only one shot back after a 79.

“We’re disappointed that we finished [fourth] on our home course,” Wagoner said. “We thought we would do better than that but maybe expectations were a little high. We’re still very young so we have a lot of golf matches ahead of us.”

Petit finished as the low-medalist after a score of 71. He edged Thompson’s 78 by one shot. Lee-Scott’s Hall and Brett tied for third overall after shooting 77.

“We never have to ask them to come to practice,” said Lee-Scott coach Todd Thompson. “They work hard at it and they’ve had some good success.”

Wagoner said although the team was disappointed in its finish, youth continues to play a factor for the Senators.

After the awards were handed out, many of the Morgan Academy players walked back to the first tee and headed out for what appeared to be a short practice round. Wagoner said it was encouraging to see that.

Morgan will play at Saugahatchee Country Club in Opelika Tuesday and will play in the AISA state championship on April 25.