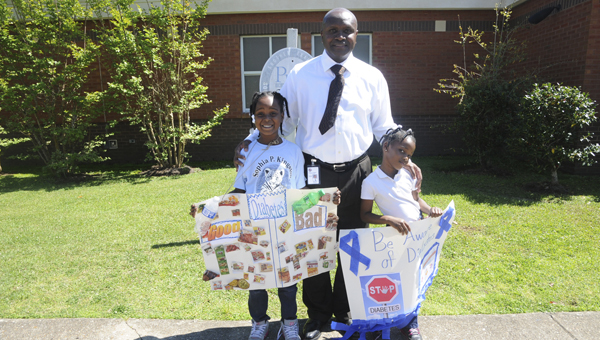 Sophia P. Kingston Principal Major Burrell is shown with students Amiyah Davis and Chasity Green during a diabetes walk at the school Thursday.

Erica Lumpkin, physical education teacher, said it is important that children know more about major health problems and how to keep them under control. She said the school had been studying diabetes all week through different activities.

“A lot of kids didn’t know what it was. So we went over things like eating healthy, exercising and staying active so that we won’t one day, have the disease,” Lumpkin said.

She said she thoughts the kids enjoyed themselves, are looking forward to next year’s activities and now have a better understanding of how important health is at the end of the week. The students made personalized posters before the diabetes walk with designs and information they learned earlier in the week.

“When it came to getting posters ready they were really excited. They wanted to learn and asked a lot of questions,” Lumpkin said.

This is her second year at Kingston and the school’s first time recognizing World Health Day.

“A lot of kids are becoming obese at an early age and I want them to know that it is not healthy. At a young age, they are eating a lot of junk food and not eating right or exercising and that can affect their health,” Lumpkin said. “I hope they grasped the concept and go home and try to eat healthier and be more active.”

Tayshaun Martin is a fifth grade student at Kingston who said he enjoyed the walk because he loves being outside.

“I feel like it is important for us to staying in shape so we won’t have diabetes. I want to do this again,” Martin said.

Madison Smith is a classmate of Martin’s and said she liked getting exercise.

“I had fun and when I get older, I want to stay in shape,” Smith said.

Kingston Principal Major Burrell said he was glad to see everyone in the school come together in support of the students.

“It is important that everyone be cognizant of their health and making sure he or she is doing the best they can to improve it,” Burrell said.