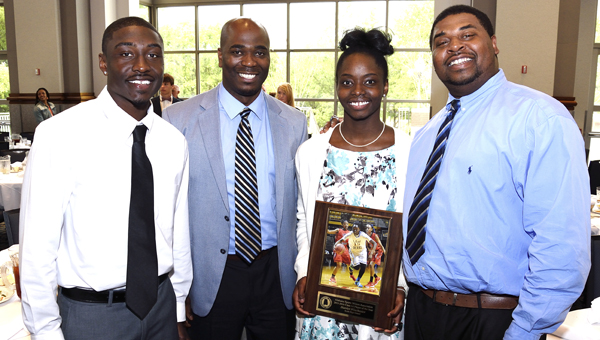 Last year, Winchester was a finalist for the honor but didn’t win. She talked then about working hard so she could get back to the banquet to win 1A Player of the Year. She saw that goal become a reality Wednesday when she beat out Spring Garden’s Tykeah Rogers and Pleasant Home’s River Baldwin to win the honor as 1A’s top girls basketball player.

“It seems like I put in a little more work this year even though we didn’t win the [championship],” Winchester said. “I played hard enough to get back myself back here and to win this award.”

The award is the latest accolade in a tremendous career for Winchester, who led Keith to Birmingham three times for state final appearances, and also helped the Bears capture the 2015 1A state championship.

She scored over 2,000 points in her illustrious career and was named to the ASWA’s 1A all-state team as both a senior and a junior. Keith head coach Cecil Williams said Winchester has an argument, along with Sandra Crumpton Moorer — the current women’s basketball coach at Stillman College who played in the WNBA — as the best girls player in Keith history.

“She’s a great athlete. I saw that in her during her seventh grade year and she never stopped working,” Williams said.

Williams said he still remembers the first time he saw Winchester shoot a basketball. After hearing from other people how talented she was, he decided to pull the then seventh grade Winchester out of class to see what she could do.

Fighting through her shyness, Winchester dribbled behind her back and drained a 3-pointer. Williams knew immediately that he had a new point guard and saw the future of the program.

“It was a total upgrade over what we had,” Williams said. “[At the time], my center was my best ball handler. It changed the program. It really did.”

Little did he know then how much the program really would change.

Several of the scorebooks are missing from the early parts of Winchester’s career, but in the games that are documented her dominance shows.

She was named the MVP of the 1A state tournament as a junior and was Central Regional MVP three times. Next year, she’ll take her talent to Troy University, where she hopes to continue her success at the college level. She said it’ll help her confidence to know she’s been recognized as one of the state’s best players.

“It gives me confidence, but then again I’m playing with other top players in the state, so it’s kind of 50/50,” Winchester said. “Knowing that I am one [of the best] is a pretty good feeling.”

Winchester is only the third Keith player in school history to win one of the ASWA’s player of the year awards. The other two were Larry Rembert in 1986 and Denise Rembert in 1991. Denise is the only Keith girls’ player other than Winchester to win the award.

Keith’s other finalist at Wednesday’s banquet, John Pettway, didn’t leave empty handed either. Pettway watched Sacred Heart’s Diante Wood win 1A Player of the Year, but also got to see his cousin, Winchester, win the honor as girls’ player of the year.

Pettway, who is a South Alabama commit, said not winning 1A Player of the Year gives him a chip on his shoulder moving forward.

“It kind of hurt, but it’s just fuel to my fire,” Pettway said. “It just keeps me going.”

The girls players of the year were Walker (7A); Japonica James, LeFlore (6A); Kaitlyn Rodgers, Wenonah (5A); Charity Brown, Sipsey Valley (4A); Emma Wallen, Lauderdale County (3A); Lacey Stafford, Geneva County (2A); Winchester (1A); and Tazsa Garrett-Hammett from Springwood School. (AISA).