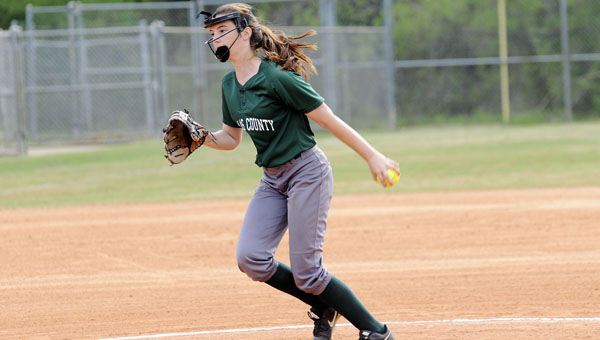 Dallas County’s Tori Hatfield throws a pitch during Wednesday’s game against the Selma Saints at the Sportsplex. Hatfield recorded 13 strikeouts in seven innings pitched, helping her team to a 9-4 victory. — Justin Fedich

When the Selma Saints turned a double play in the top of the fifth inning, it looked like they would have a chance to tie the game or take the lead in the bottom of the inning trailing by just one run.

With two outs, however, the Dallas County Hornets scored five runs in the same inning, and Selma was unable to make up the difference.

Tori Hatfield recorded 13 strikeouts as the Dallas County Hornets (15-1) kept the Selma Saints (4-5) from keeping up offensively in a 9-4 victory Wednesday at the Sportsplex. Dallas County head coach Willie Moore said he thought Hatfield had a strong performance at the mound, but he wasn’t pleased with his how his team performed as a whole.

“I was pleased with her effort,” Moore said. “I thought she pitched really really well. I thought Selma High overall played better as a team than what we played. We’ve got to correct that.”

The only run in the first four innings was scored in the top of the first inning. Dallas County’s Calandra Morrow advanced home on a bases loaded infield fly. Selma pitcher Dajah Thrash was hit in the leg, but recovered to limit Dallas County to only one run in four innings.

“I think Dajah did a great job, especially after she got hit really bad,” said Selma head coach Jameria Johnson.

In the bottom of the first inning, Mariah Davis stole a couple bases to reach third, but Hatfield struck out three batters to keep the Saints scoreless.

While Selma reached base in the next two innings, Hatfield still managed to strike out three batters in each of the first three innings, preserving the shutout for Dallas County. After a couple more strikeouts from Hatfield in the bottom of the fourth inning, the Hornets entered the top of the fifth inning with only a 1-0 lead. With no outs, Morgan Krumnow popped a bunt into the air, and it was caught by Selma catcher Denetra Whitlock. She then threw the ball to first base to get a double play after the runner forgot to tag up.

Dallas County responded with a scoring run with two outs. Yasmeen Green drove in  a pair of runners with a base hit to give the Hornets a 3-0 lead. Keyondra Fletcher stole home from third base, and Shaniya England hit a shot over shortstop to bring home Green. The Hornets led 6-0 by the time they had  three outs.

The Saints got on the board in the bottom of the fifth inning, as Thrash scored Selma’s first run.

Kayla Page hit a deep shot to right field that was caught by Morrow, but Davis tagged up and scored.

Charmekia Moore drew a walk and stole two bases to reach third base, but Green caught a line drive to first base to end the inning and keep the Dallas County lead at 6-2 at the end of the fifth inning.

Thrash stayed on the mound in the sixth inning and added two strikeouts to retire Dallas County in three batters. Hatfield contributed two more strikeouts in the bottom of the inning to keep the inning scoreless.

“I know that we can do a lot better.” Moore said.