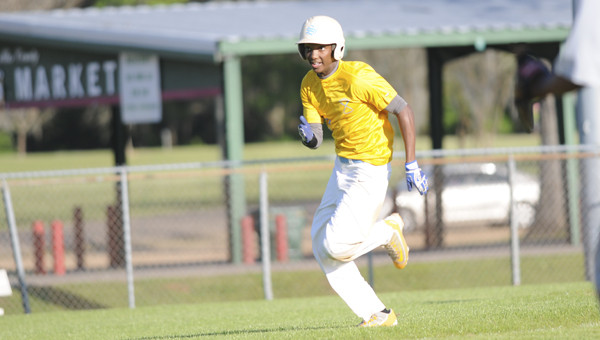 Selma’s Ron Sanders rounds the bases after multiple errors from Paul Bryant allowed Sanders to hit himself and two other Saints home to take an 8-7 lead. — Justin Fedich

At various points during the game, the Selma Saints trailed by one, two and three. Each time, Selma came back to tie or take the lead. Even with the persistent comebacks, it still wasn’t enough.

Despite erasing multiple deficits throughout the game, the Selma Saints (7-6, 0-3) couldn’t survive a slugfest Tuesday against the Paul Bryant Stampede 13-11 at Bloch Park. Ron Sanders pitched all eight innings for Selma in a losing effort.

“I just told them they don’t need to hold their head down because they fought until the end,” said Selma head coach Burrell Bonner.

Each team scored one run in the first inning, with Seth Williams giving the Stampede a one-run lead in the top of the inning and Selma’s Witney Gunn scoring on a RBI from Ryhiem Eaton in the bottom of the inning.

With the bases loaded in the top of the second inning, Williams’ RBI to made it 2-1 in favor of Paul Bryant. Mark Lovell scored after Sanders walked his third batter of the inning, and Brenden Sanchez drove in another batter, and Selma found itself down 4-1 going into the bottom of the second inning.

By the end of two innings, the Saints had their first lead of the game. Gerald Barron II smacked a triple to drive home DeAndrae Alexander, and Barron scored a few batters later when Sanders hit a ground ball down the first base line. Jekobi Lee put Selma ahead 5-4 when he blasted a RBI double that sent Kiwansis Jones and Gunn home.

Paul Bryant answered in the top of the third inning, when RBIs from Ron Warner and Reed Snyder gave the Stampede a 7-5 advantage. The damage could have gotten worse, if not for Jones nearly doing a full split to dig out the throw to first base for the third out. Jones jogged gingerly off the field, but Selma quickly regained its composure.

With two batters on base, Sanders stepped up to the plate.

The Selma players could sense it. The dugout was hollering, the runners on first and second base were clapping in rhythm and Sanders was eyeing down the pitcher, ready to make up for the seven runs he had allowed in three innings. Sanders made contact, sending a ball right over Warner’s outstretched glove in left field. A couple of Paul Bryant errors allowed all three Saints to round the bases and take back the lead at 8-7.

Trailing 11-9 in the bottom of the seventh inning and needing two runs to tie the game, Martino Moorer blasted a triple to bring Barron home and pull within one of the lead. Moorer scored on an errant pitch to tie the game 11-11 and send the game to extra innings. Snyder gave Paul Bryant the lead it needed to leave Bloch Park with a victory when he crushed a shot through the gap between shortstop and third base to send two Stampede runners home. The Saints were unable to tie it up in the bottom of the eighth inning.