Local schools test how they stack up at Selma High meet 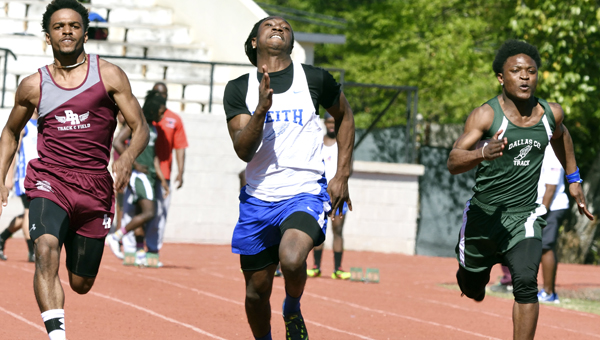 The Alabama High School Athletic Association’s track and field state championships are a month away, so the track season is nearing its finish line. On Tuesday, local schools and several others from around the state gathered at Memorial Stadium to see how they stacked up during Selma High School’s meet.

If Tuesday’s results are any indication, several local athletes have a chance to place at the state level.

“I think guys and girls ran hard and they put out a real good effort,” said Dallas County coach Cliff Nix. “It gave us a chance to find out what we can work on.”

Nix said Tuesday was not only the Hornets’ first track and field meet of the year, but also the first one he had led since high school. He took over the team this year for from Robert Dolbare, who helped revive the program in 2011 after a decade-long absence. Nix said the focus for the Hornets moving forward will be on conditioning.

“Right there toward the end of a lot of races, I noticed we kind of pulled up when we should’ve been pushing through the finish line,” Nix said.

Selma’s effort was led by Daisha Simpson and Jonathan Pressley. Simpson won the shot put with a throw of 29 feet, 7 inches and Pressley edged Oliver to win the 200-meter dash with a time of 22.5 seconds.

“We’ve seen progression and that’s the good thing about it,” said Southside coach Jeremy Sturdivant. “The attitudes of the individuals involved and the athletes, they were great. Nobody put their head down and everybody kept pushing forward.”

Keith’s Tyeshia Malone finished second in the 800-meter dash, Quomila Johnigan was first in the 400 meter and second in the 200 meter dash. Eu’Neka Tower was third int he 800 meter for the Bears.

Other schools at the meet included Ellwood Christian, Demopolis and Benjmain Russell.