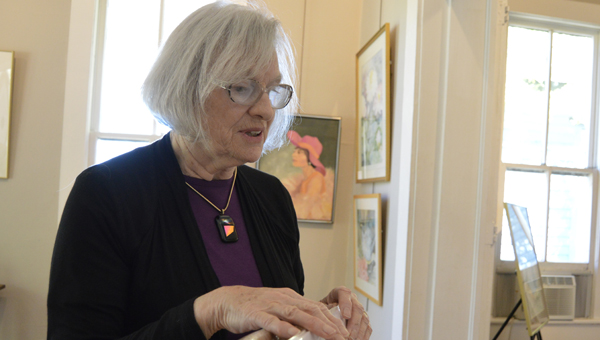 Joanna Nichols’ exhibition, “ Evolution of an Artist,” will open Sunday from 2-4 p.m. at the Selma Art Guild gallery. — Emily Enfinger

The show will feature more than 20 works ranging from the late 1950s until present day.

The opening reception and artist lecture will be from 2 – 4 p.m. The event is free and open to the public. The show will be available at the gallery until the end of the month.

“You’ll see how much I’ve changed and what I’ve started with,” Nichols said.

Originally from Howick, a village in Northumberland, England, Nichols discovered a talent for drawing as a child, drawing portraits of her mother’s two French Bulldogs. Later on, she lived in areas of Canada and Connecticut where she began taking art and painting classes.

During this time, she made many transitions including subject matter and medium.

In her earlier years, Nichols primarily painted portraits until she realized portrait painting wasn’t for her.

“I tried drawing my friends using pastels and oils and they never really like them that much. So I realized I wasn’t quite good enough,” she said.

Painting with oils is popular for its tradition and ability to create thick texture. However, she said the fumes from the paint and supplementary materials can be toxic over time, which is why she transitioned to something less harmful such as watercolor. Although now she mainly uses watercolor, she still occasionally uses pastels but finds them difficult to keep.

“Pastels are very nice to use, but they are a problem because they can be very easy to ruin,” she said. “You can just touch them and they’ll be spoiled.”

In 2000, she and her husband Ken moved to Selma after he retired. He is originally from Selma and had wanted to return.

“When I first came here I was very fascinated by the very old things,” Nichols said.

Nichols believes it’s important for artists to transform and constantly work on something new to keep things interesting.

The exhibition will include earlier works such as the drawing of her mother’s dogs and oil seascapes of the Northumberland area. The show will also include works that haven’t been shown before including portraits and pencil studies.