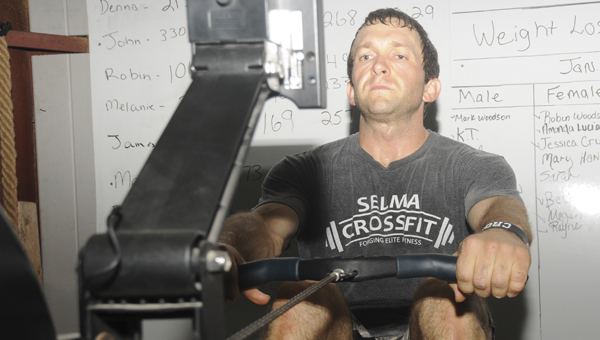 Not even 10 minutes into his workout, which consisted of multiple sets of kettlebell swings, cycling and sit-ups, John Weaver’s shirt was painted with sweat.

It’s the way Weaver prefers it, and in some ways, it’s the way it’s always been.

Weaver started working out at Selma CrossFit in May 2014. He’d never been weightlifting until then. Now, nearly two years later, he’s the second ranked Crossfit competitor in the Southeast in the scaled division and 11th nationwide.

His next goal is to move up to RX, the division professional CrossFit athletes compete in. He knows it will take hard work and determination to bring himself back up the rankings in the toughest CrossFit division, but that’s nothing Weaver isn’t used to.

Weaver, a 31-year-old resident of Orrville, has been building things and lifting objects most of his life as part of his job working on a farm. He starts work every weekday at 6:30 a.m. and goes until 4:30 p.m. From there, he travels to the Selma CrossFit gym for a workout from 5:30 – 6:30 p.m. For at least 12 hours a day, he’s moving a lot. In just under two years, it’s taken him pretty far.

Before starting CrossFit, Weaver was happy in his job, but there was something bothering him, so he decided to fix it.

“I’ve always struggled with a little bit of a weight issue,” Weaver said. “I had never done a lot of cardio working out.”

At his heaviest, Weaver said he was 195 pounds, which was big for his size. Through CrossFit, he’s lost four waist sizes, gained plenty of muscle and dropped to 168 pounds.

“It’s been amazing for me, what I’ve been able to do,” Weaver said.

Weaver said he works out four days a week — Monday, Tuesday and Thursday evenings and Saturday mornings — with most workouts lasting an hour, including warming up and stretching.

While the amount of workouts Weaver completes in a week doesn’t jump off the page, it’s what he does with those workouts that allows him to leap over his competition.

Weaver said a half-hour workout can be more than enough if he’s pushing himself both mentally and physically to the limit for all 30 minutes.

“Your mind is telling you to quit, but your body really has a lot more in you,” Weaver said. “You’ve just got to keep telling yourself that you can keep going. One more rep and just keep pushing.”

Weaver started in CrossFit with a desire to get in better shape, but with a lack of knowledge on how to properly do the lifts, like the snatch and the clean and jerk, that are so common in CrossFit. His coach Tommy Weber has given him the tools to master those lifts.

Weber said in the last six to eight months, Weaver has become comfortable with the more technical lifts. Even though Weaver didn’t have all the lifts down when he first entered the gym, Weber said he noticed that Weaver had “natural ability.”

“Once he started learning the lifts and the movements, that’s when he started excelling,” Weber said.

His maximum bench press weight started at 170, but recently he said he maxed out at 235 pounds.

“That’s really the biggest jump that I’ve seen is in my bench press,” Weaver said.

Still, Weaver knows he will need to increase his weight and speed across all his workouts if he is going to be competitive at the RX level. Weaver said many professional CrossFit athletes start in their lower 20s, and he said he might be past his prime.

That won’t stop him from trying. He sets the bar at someday being ranked 300 or 400 in the RX division, although he admits those are extremely lofty goals.

For someone who’s been lifting objects long before he needed to clean and jerk, making the jump from scaled to RX won’t cause him to break too much of a sweat.