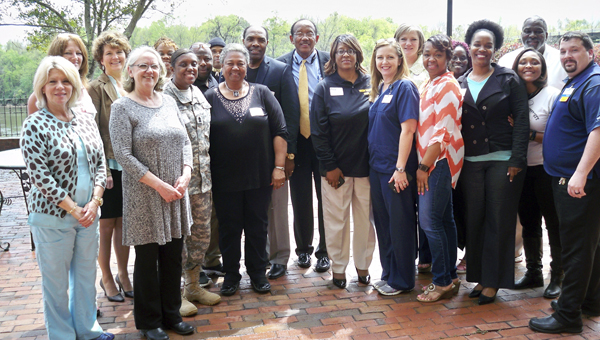 The Muscular Dystrophy Association held a lockup in Selma Thursday and raised more than $40,000. Many members of the community were “arrested” and asked friends and family for bail money. Those that participated were taken to the St. James Hotel for a luncheon. — Submitted Photo

The Muscular Dystrophy Association chose Selma for the first time for its annual lock-up.

After leaders in Selma helped raise a little over $40,000 to benefit MDA, fundraising coordinator Christy Cruse knew her organization made the right choice to visit Selma.

Members of the Selma community who helped raise money for MDA were “arrested” Thursday and put into cop cars, where they were then driven to the St. James Hotel for a luncheon. After the luncheon, they were escorted back to work in limousines to celebrate the money they had raised for muscular dystrophy.

Selma High School principal Emma Theresa Alexander knew instantly it was a cause she wanted her school to support. Her faculty built her a jail out of cardboard and helped her make a video for her students.

“Help get your principal out of jail,” Alexander said in the video.

Alexander said it didn’t take long for her students to support the cause. Selma put on a Battle of the Bands fundraiser a few weeks ago to help raise money to bail Alexander out of “jail.” With the help of her students, Alexander raised $2,400.

“I think it is a good cause for the community, and also I wanted it to be noted that Selma High School participated as a collaborative group to make sure their principal was going to be out of jail,” Alexander said.

Wal-Mart store manager Matt Joiner said the community and the workers at Wal-Mart helped him raise $2,500 for MDA.

Joiner said even though he raised $100 more than the asked amount, that amount was not enough.

“It goes so far,” Joiner said. “If you’ve ever had a family member or someone who has had this, just the little amount of money that we’re able to help goes a long way for another family.”

“We had fun today. We had a lot of fun dealing with everybody who made a donation,” Tubbs said.

While it was the first time many in Selma raised money for MDA through the lock-up, Cruse feels personally connected to the cause. She said she was proud of Selma for the effort the city put into raising the money.

When Cruse thought of what the fundraising efforts meant to the organization, it brought tears to her eyes.

“Being a momma and being able to help other mommas that are going through a challenge that not all of us are tasked to face, you know that you’re redirecting the course of their lives,” Cruse said.