Wingo accepts another job, will be leaving Morgan 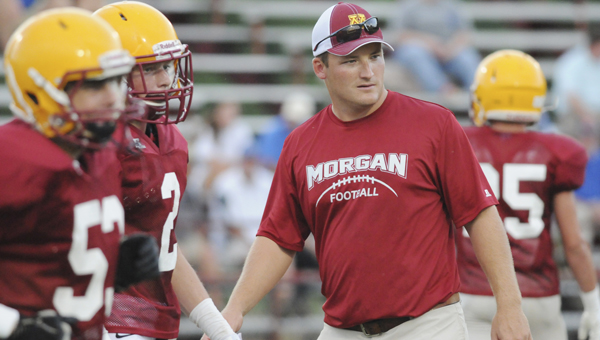 Morgan Academy head football coach Jake Wingo told the Times-Journal Friday that he will be leaving the school for another high school football coaching position. Wingo has coached the Senators for the last two years, including leading them to a 4-6 record this past season.

Wingo said Friday that he couldn’t name the school he’s leaving for because the hire hasn’t been announced by that system’s school board. He did confirm that he will be coaching at a public school within the state of Alabama, but it won’t be in the Selma area.

Wingo will remain at Morgan Academy throughout the remainder of the school year.

“This community means a lot to us,” Wingo said. “I’m just thankful we had an opportunity to come. It’s a great area. We’re going to miss it, and I thank the players for all their hard work and effort, and we’ve made a lot of progress in two years.”

In his four years as a high school football head coach, Wingo has accrued an 11-30 record. He had a 5-15 record in two seasons at Morgan. Prior to coming to Morgan, Wingo was a head coach for two seasons at Sumter Academy.

After going 1-9 in his first season at Morgan, Wingo led the Senators to an improved season in 2015, going 4-6 and barely missing out on the Alabama Independent School Association playoffs.

Wingo, a former football player at the University of Alabama, said the foundation is there at Morgan to compete for championships year in and year out.

However, he said he takes more pride in the team’s off-the field accomplishments.

“There’s no question, I’m most proud of helping boys turn into young men and the quality, the character that it takes to be successful in life… I feel like we’ve come a long way,” Wingo said.

Wingo said his time at Morgan has been a great learning experience and has made him a better coach.

“Selma will hold a special place in our heart. The school will and those kids will. Those players of mine are very special to me,” Wingo said.

Although Wingo will remain at Morgan for the remainder of the school year, he said he will not be in charge of the team’s spring training. He expects the next head coach to run Morgan’s spring training, which normally begins at the end of April or beginning of May.

“I’m excited to see what they do in the future,” Wingo said.

The position of head football coach, athletic director and dean of students has been posted on the Alabama Independent School Association website. The job listing lists a bachelor’s degree as a requirement and lists previous coaching experience as a desired quality.

Resumes are due by April 20 to interim headmaster Karim Oaks.