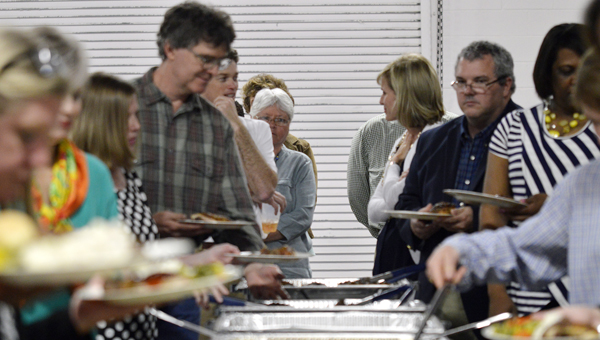 The United Way of Selma-Dallas County held its annual banquet to honor its partners Thursday night at the George Evans Reception Hall. Above, many of those who attended stand in line to make a plate of food. –Emily Enfinger

Since the early 40s, the United Way of Selma and Dallas County has been helping solve community problems with the help of local groups and businesses. Thursday night, the United Way showed its appreciation for that support with its annual banquet.

“Every year we like to recognize the companies and the people that help us accomplish our goals,” said United Way executive director Jeff Cothran. “We really just want to thank the whole community. I would love to be able to sit down at everybody’s house tonight, right in front of them and thank them with my heart and soul.”

Twelve tables were assembled toward the stage to accommodate nearly 80 people in attendance.

“What goes on in these agencies is just vital to this community,” he said.

Once people began finishing dinner, keynote speaker Clay Carmichael walked up to the podium. Carmichael is a member of Blackbelt Benefit Group. The group, much like United Way, works with other local agencies to help accomplish projects within the community.

Carmichael stressed the importance of working together.

“We have to make sure we’re all inclusive,” he said.

Afterward, Cothran announced big news to the audience. United Way was awarded one of 200 grants given for Doc in a Bus. The National Association of City County Health Officials (NACCHO) awarded $15,000 to the group to extend the program. The bus was created in 2008 as a partnership to provide free healthcare to the uninsured within the county. The bus also serves as the Dallas County Medical Reserve Corp to provide emergency medical services in times of disaster.

Cothran also announced that $100,000 was donated from an anonymous donor. He said with the large donation, United Way has been able to make investments toward groups such as Grow Selma.

Cotheran said without the help of United Way’s supporters, the community would not have the vital groups and organizations it has now.

“What y’all do, this is where the rubber meets the road,” he said.