Theater has been back open a year 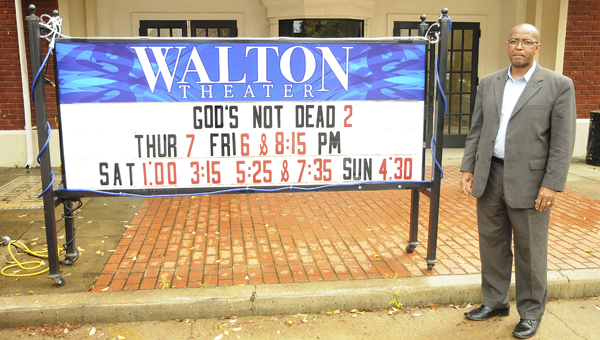 Pastor John Grayson is pictured at the Walton Theater. He took over at the theater one year ago. –Chelsea Vance

The Walton Theater hit a milestone earlier this month, when it reached the one year mark since it reopened.

All Things Are Possible, a nonprofit organization, leased the theater in March 2015 and Pastor John Grayson has handled day-to-day operations.

“I saw an opportunity to provide entertainment,” Grayson said. “A lot of people in Selma said they didn’t have anything to do. There was no theater and we thought we would step in and provide empowerment for the community.”

Sharon and David Jackson operated the theater before Grayson, but it closed in 2013.

It was vacant for a year and a half before Grayson took over in March 2015.

He said he feels good about where the theater is one year after it reopened.

“It’s been a lot of fun; we have enjoyed it. We are very thankful to have our one-year anniversary,” Grayson said. “Business has been good and the community has been very good to us.”

He will host a Spring Street Fest next month where free food, a movie and fun activities will be provided to children. There will also be a feature film that night.

Grayson pastors at Gospel Tabernacle Church in Selma and makes it a point to offer faith films at the theater. He said those movies have done great in sales, but also can send a powerful message.

“The faith community has been extremely supportive of our religious and Christian films. Last year in August, “War Room” was probably the largest film we had in the entire year,” Grayson said. “We do a lot of faith films because we see the movie theater as an entity that can speak to the community. We want entertainment but empowerment at the same time.”

The theater only shows movies that are family-friendly. Because Selma is a small town and the Walton Theater only has one screen, Grayson said it would typically show films second hand or after all major theaters show them.

However, they have shown films on opening nights and even before the movies hit bigger theaters in other places.

The theater is open Thursday through Sunday. Showtimes on Thursdays and Fridays are 6 and 8 p.m. Movie are shown on Saturdays at 1,3, 5 and 7 p.m. and Sundays at 4:30 p.m.

Prices are $6 for children ages 3-12, $8.50 for adults, $7 for students ages 13 and up but a $1 discount is available if they show their school IDs. Matinee movies are $5 for children and $7 for adults. Military discounts are available.

He has plans to eventually offer more than one movie at a time along with dinner and movie deals.

“I want to thank the community for their support for the past year. It has really been a blessing to operate the theater,” Grayson said.