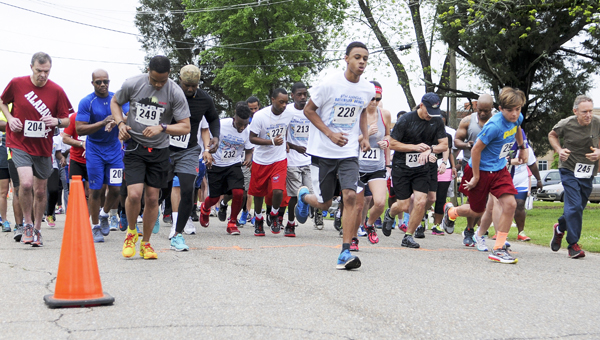 Hundreds of runners took part in last year’s Butterflies and Bridges 8K. This year’s race will be held Saturday, April 16. The race will take runners through downtown and over the Edmund Pettus Bridge.

The Selma City Schools Athletic Department is hosting the ninth annual Butterflies and Bridges 8K race and 2-mile fun run on Saturday, April 16 at Selma High School at 8 a.m. The race will begin at Selma High School, take runners around historic downtown Selma, over the Edmund Pettus Bridge and back down Broad Street to the finish line of Selma High.

Race coordinator Bill Potter said he is hoping between 175 and 200 people participate in this year’s race. The proceeds from the race will go toward the Selma City Schools Athletic Department.

Potter said in the past, the money raised from the race has helped supply new workout and playing equipment and fund road trips for the athletes in Selma City Schools. He believes that getting kids involved in sports will make them better students as well.

“Trying to keep them in school, keep them motivated and the better environment we can provide for them through fundraisers like this, the easier it is to get them involved in sports,” Potter said.

Last year, Tony Johnson was the first place overall finisher with a time of 31:57 and Ann McClendon led the female overall category with a 42:50 finish time.

There is a $100 bonus prize to anyone who can set a new record this year. After the race, there will be an awards ceremony in front of Selma High, as well as a post-race drawing for prizes donated by local businesses.

While there is a lot at stake for the competitive runners, Potter said the race is for anyone who wants to be active. He said he’s talked to many people who will be walking the 2-mile run with their Fitbit to get their 5,000 steps in for the day.

“Even though it’s called a competitive race, you can always challenge yourself to do a little bit more,” Potter said.

Checks can also be mailed and made out to the Selma City Schools Athletic Department at Selma High School, 2180 Broad Street, Selma, AL, 36701.

Potter is counting the days until race day.