Free to compete in Drive, Chip, Putt finals this weekend 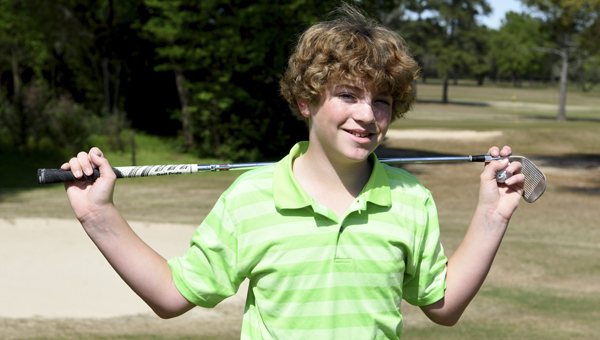 Morgan Academy’s Jones Free will take part in the Drive, Chip and Putt finals this week at Augusta National in Georgia. Free is one of 80 players who will compete in the competition and one of only 10 boys in the 12-and 13-year-old age group. –Daniel Evans

Jones Free admits he’s nervous for this weekend, where he’ll compete at Augusta National in the finals of the Drive, Chip and Putt Contest, but his nerves have nothing to do with golf.

At 13, this weekend will also be the first time he’ll step inside an airplane.

“I don’t like roller coasters or ferris wheels or anything like that,” Jones said, referencing the heights that come along with both attractions.

Jones and his dad William Free, will be flown to Augusta this weekend and his mother, Callen, and sister, Sarah Lloyd, will also join them at the course. Once there, Jones will compete in the finals against 10 boys in the 12-and 13-year-old age group from around the country.

Win or lose, Jones said he’s planning to soak in the whole experience.

“It’s one of life’s best achievements to get here,” Jones said. “Some people would cut their arm off just to go in the gates, so I’m pretty excited.”

Jones went through qualifying at Capitol Hill, Golf Course, TPC Louisiana and TPC Sawgrass in order to qualify for the finals at Augusta.

Jones said he’s won 10 or 15 golf tournaments in his career, including topping the Monroeville Tournament earlier this month. As a seventh grader at Morgan Academy, he’s already the top player on the Senators’ golf team.

“He is probably in the top 10 percent of golfers his age in the country,” said Morgan Academy golf coach Ira Wagoner. “He’s that good.”

Jones’ love affair with golf started at a young age. He said he was 2 years old the first time he picked up a club.

“It was a 6-iron or an 8-iron. It was my dad’s club,” Jones said. “We were out on the range and I was just swinging with it. I couldn’t really hit the ball.”

At age 5, he beat his dad for the first time in a nine-hole round. Jones shot a 41 and beat William by three shots.

“I knew he was going to beat me one day. I just didn’t think it would be at 5,” William said. “That’s when we knew God had given him a gift, and we are going to try go after it if we can.”

At age 8, Jones hit his first ever hole-in-one at the Selma Country Club. He hit the shot from over 140 yards away and didn’t realize it had went in until he walked up to the hole.

Jones said it wasn’t until two years later that he really fell in love with the sport. Now he’s practicing every chance he can get.

Using a driver he purchased from former Auburn University golfer Andy Stewart, Jones now consistently drives the ball between 270 and 280 yards. He said that’s the strength of his game, but he’s continuing to work to improve in all areas.

William said during the summer months, Jones is up at 7 a.m. and waiting for someone to take him over to the Selma Country Club.  The only time he doesn’t focus on golf is during the winter, where he usually turns his attention to basketball. His dad said basketball gives Jones a break so that he doesn’t get burned out on golf.

When it comes to his future, Jones’ parents are not pushing their son in any direction. They’d love to see him get a scholarship one day playing golf, but only if that’s what he wants to do. Jones said he has aspirations to play golf in college and then have a professional career in the sport too.

“Golf after college takes so much dedication so we are trying not to push him right now,” William said. “We would love for him to go to college to play if that’s what he wants to do  but it’s basically up to him. We’re behind him no matter what he decides to do.”

One of the reasons Jones has been so successful is his ability to keep his composure on the course after bad shots. William said that’s a quality in his son that he’s always admired.

“I’m not going to say that I just leave everything behind because I don’t a lot of the time,” Jones said. “I get mad. I don’t throw clubs or anything, but the next hole I’m fine.”

Since he’s so relaxed on the course, Wagoner said he doesn’t expect him to have any butterflies this weekend.

“He’s been in the spotlight enough,” Wagoner said. “If you get to see him on TV, you’ll probably think he’s out on the practice green at the Selma Country Club. I don’t think it’ll affect him at all.”

“I think if I put both of my chips close, I’ll have a good chance of winning,” Jones said.

The family was also given tickets for Monday’s practice rounds at Augusta National, where many of the world’s top golfers will be getting ready for The Masters, which starts on Thursday.

Jones will be watching closely for Jordan Spieth, his favorite golfer. If he spots him, he hopes to get his attention so that he can meet him and get an autograph or two.

The Drive, Chip and Putt competition will take place Sunday morning and will air live on the Golf Channel from 8 a.m. until noon.