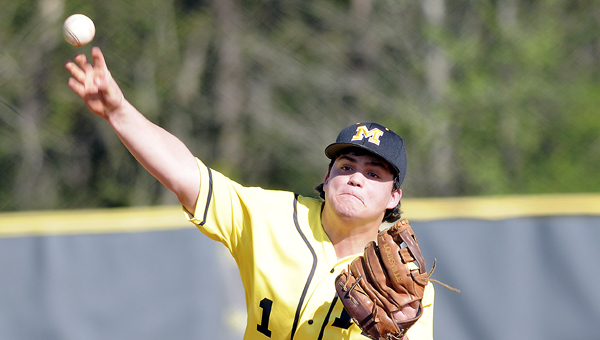 The Meadowview Christian Trojans baseball team was down a few members, and it made a young and inexperienced team look even younger.

Meadowview (2-8) lost 12-0 to the Cahawba Christian Chargers Tuesday at home. Despite holding the Chargers scoreless during the final two innings, Meadowview’s many errors gave Cahawba the opportunity to build an insurmountable lead in the first three innings.

“We made too many errors,” said Meadowview coach Lebo Jones. “Fly balls hit right at us that we couldn’t catch.”

The Trojans were without two key people during Tuesday’s game. Head coach Scott Gunter was absent due to illness, and senior Jevar McGuire, who bats clean-up, couldn’t make the game due to a basketball tryout.

Jones said the team is relatively young, forcing multiple players who aren’t yet in ninth grade to play big roles on the team.

He’s hopeful the team’s youth will lead to success in future years, but for now the Trojans are experiencing some growing pains.

Tyler Sebren started at pitcher for Meadowview, and he couldn’t keep Cahawba from reaching home plate for long. The Chargers’ first two batters scored runs to take a 2-0 lead.

In the bottom of the first inning, the first three Meadowview batters struck out, flew out and grounded out to end the inning.

The Chargers took full control in the top of the second inning, as their batters found a comfortable hole in between shortstop and third base. Cahawba tacked on six more runs, and the Trojans’ clean-up batter, Chemar McGuire, stepped up to the plate for the first time with his team down 8-0.

McGuire led off the inning with a ground ball single, and John Ryan Szymanski walked to put two Trojans batters on base. A balk from the Cahawba pitcher allowed McGuire to reach third base, but a third out left him and Szymanski stranded on base.

Sebren popped a single to short center field to begin the inning and Jeremy Lee drew a walk, but the Trojans once again failed to convert.

Lee came to the mound for the last two innings and held the Chargers scoreless. In both the fourth and fifth innings, Lee finished Cahawba off in three batters. In the fifth inning, Lee caught two pop flies.

“He’s an eighth grader and one of our best players,” Jones said of Lee. “We need him at catcher, but we need him at pitcher too.”

While there have been some bumps along the road throughout the first 10 games of the season, Jones said he expects the Trojans to be much better by season’s end than they are at this point in the year.

“We’ve got a young team, but the future looks bright,” Jones said.