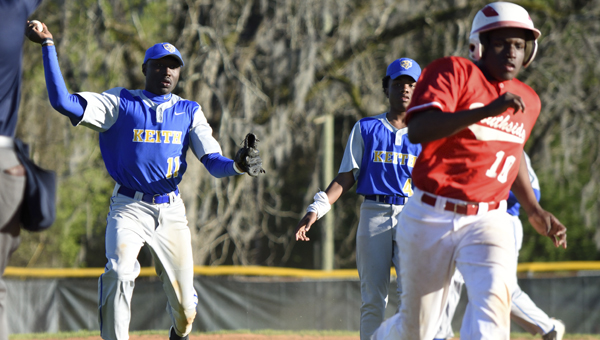 Keith third baseman John Pettway attempts to throw out Southside’s G’Neil Johnson at home plate during Tuesday’s game at Bloch Park. Before Pettway could finish his throw, the ball was ruled to be in foul territory. –Daniel Evans

Keith and Southside played their first baseball game after Spring Break Tuesday at Bloch Park. After a few rocky moments early, the Panthers (4-2) looked like they hadn’t missed a beat despite not practicing in a week.

Southside used aggressive base running to turn a game that was close early into a 15-3 rout. The Panthers scored four runs on wild pitches, but also put themselves in scoring position by running every chance they had.

“We have to run the bases a lot because we can’t hit that well,” said Southside coach John Solomon. “We have to run our way around and make something happen.”

The Panthers scored two runs in the first inning to get the lead early. The first run was on a ground out by Brandon Oliver, which scored Keshawn Arrington. The second run came on a fielding error that allowed Khamari Gibbs to trot home.

In the second inning, Marquaveon Murry singled to scored DeQuan Johnson to put Southside up 3-1. Two batters later Walker grounded out, but Murry and Arrington scored on the play to make Southside’s lead to 5-1.

Keith (0-4) scored its second run of the game on an infield single by Lamar Crumpton, which scored Jeashan Black. The Bears couldn’t inch any closer in the inning as Southside’s Jonte Small forced John Pettway to strike out to end the scoring threat.

Southside broke the game open with 10 runs in the third and fourth innings.

A double steal by the Panthers allowed Gibbs to score. Ronnie Caver, Keterius Jones and Johnson also scored in the third inning for Southside. In the fourth inning, Gibbs singled to score Oliver and Kenyon Walker to extend the Panthers lead to 11-3.

A dropped third strike allowed Johnson to reach base on a confusing play where neither team appeared to know exactly what was going on. Johnson ended up reaching safely after a poor throw to first and G’Neil Johnson scored.

Keith coach Anthony Lumpkin said that was the play that bothered him the most.

“We practice better than what we played today,” Lumpkin said. “You would think that would translate to the field and it’s obvious it’s not.”

The Panthers added two more runs on errors. Johnson scored after Murry reached base on a fielding mistake and Arrington scored on a wild pitch by Keith’s Brian Crum.

Keith’s Jim Pettway and John Pettway scored for the Bears on wild pitches in the first and third inning, but little else went right offensively for Keith. The Bears had only two hits in the game and none after the second inning.

Jim Pettway was the starting pitcher for the Bears and was pulled in the third for Crum, who finished out the game for the Bears.

Small got the win after pitching two complete innings. Murry pitched the remaining three innings for the Panthers, who will play two games against Thomasville on Wednesday.

The first game is actually the end of a game that was called earlier this year due to weather. Southside leads 8-7 in that contest, which will resume Wednesday at Thomasville.

Keith is scheduled to play Calhoun Thursday at Bloch Park.