Rachel Qureshi, a 2007 graduate of Meadowview Christian School, never played with weapons or went hunting when she was younger. Now, she’s in charge of training sailors on a United States Navy ship how to properly use firearms. 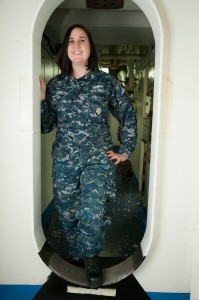 “They say Rachel is the last person they ever would have thought would have been carrying M-16s,” Campbell said.

Qureshi is a gunner’s mate aboard the Wasp-class amphibious assault ship USS Bataan operating out of Norfolk, Virginia. Tanner is a machinist’s mate who serves aboard the USS Maryland, homeported in Kings Bay, Georgia.

Tanner won the Senior Sailor of the Year award in 2015, which recognizes superior performance of enlisted personnel emphasizing outstanding achievements, exemplary personal conduct and military bearing and demonstrated initiative in the performance of duty.

“Being recognized is always an honor,” Tanner said. “This honor really goes to my shipmates, my chiefs, and most of all to my wife, Sara. They have supported and mentored me allowing me to be here.” 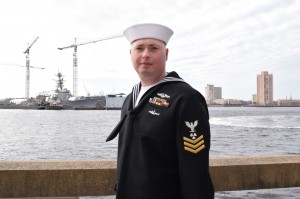 Tanner, a graduate of Dallas County High School in 2001, serves many roles aboard the USS Maryland. He is the senior mechanic, qualification officer, indoctrination coordinator, and First Class Petty Officer Association President.

In addition, Tanner said he is the senior watch stander in charge of all nuclear propulsion and support equipment aboard a nuclear ballistic submarine.

With all the responsibilities Tanner holds, he said has learned valuable lessons in the time he’s spent in the Navy.

“My time in the Navy has taught me that knowing the people you work for and with helps to foster a better work environment,” Tanner said.

Although Campbell only sees her daughter three or four times a year, Qureshi said she still feels at home when she is at work.

“The crew aboard this ship is like a family,” Qureshi said. “It is comforting because I am far from home and I have a second family aboard the ship.”

While it was surprising to some of her friends and family that Qureshi decided to enlist in the Navy, Campbell said she wasn’t blindsided by her daughter’s choice.

Campbell said Qureshi has always loved travel and adventure and the Navy gives her opportunities to do just that.

“I’m very proud of how she’s matured and become motivated and determined,” Campbell said. “She’s always been a determined person from the time she was little, so it really wasn’t surprising that she has done well and accomplished what she’s done.”

Although it is hard work, both Qureshi and Tanner are enjoying their time in the Navy and don’t plan to leave anytime soon.

“I enjoy that the Navy brings structure to my life and in this chaotic world we live in,” Tanner said.