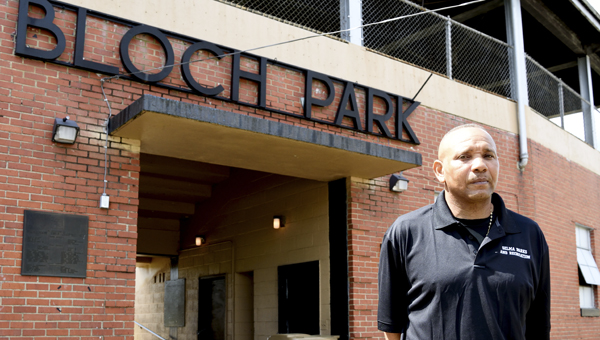 Gerald Barron, the city’s new baseball director, poses for a photo Monday in front of Bloch Park. Barron started the job last week and said he is trying to get up to speed as opening day approaches on Friday. –Daniel Evans

The city of Selma’s new baseball and softball director is no stranger to the game. Gerald Barron, who is entering his second week on the job, has umpired for the last two decades and he’s coached teams in the city league in the past.He’s also watched from the other side of the fence, as a parent to his son Gerald Barron II, who played in the league but has now moved on to Selma High School.

Barron said all of those different perspectives will help him shape his new one — as the guy behind the scenes running the city’s recreation league.

“Hopefully, I can try to be a good mediator between the umpires and the coaches, being I’ve experienced it from both sides,” Barron said.

Barron took the job last week after former director Jamie Tellier resigned. Since he’s only had the position a few days, he said he’s still getting up to speed.

“A lot of things I’m learning as I go,” Barron said.

Barron, 46, and his wife Donna have three children: Gerald, Mary and Brandon. Barron grew up in Selma playing baseball in the city league and started umpiring in 1996.

Through the years, he has refereed countless local high school football, basketball and baseball games.

He said he’s very passionate about sports in general, which he said will help him be successful in his new role.

Although he’s new to his position, he already has some ideas to better the city’s baseball program for the children.

First, he’d like to make the season longer, so that it continues throughout the summer and gives children something to do. He said that could be accomplished by creating a mini-league after the regular season wraps up.

“By the time they get out of school, baseball season at the rec. is almost over,” Barron said. “They need something to keep them out of trouble, and I think that can help a lot.”

For now, Barron is setting his sights on  Friday’s opening day for the Selma Parks and Recreation Department. Jerseys were set to arrive on Monday and all of the scheduling has already been completed.

With those two things out of the way, most of the planning work for Friday has already been completed.

Once Friday arrives, Barron said he’ll keep a close eye on field four at the Sportsplex, which is the field where he has umpired games the last six or seven years. However, he doesn’t plan to have a lot of free time, given all of the games that will take place the first weekend.

“I’m sure I’ll have my hands full with other stuff that’s going on,” Barron said.