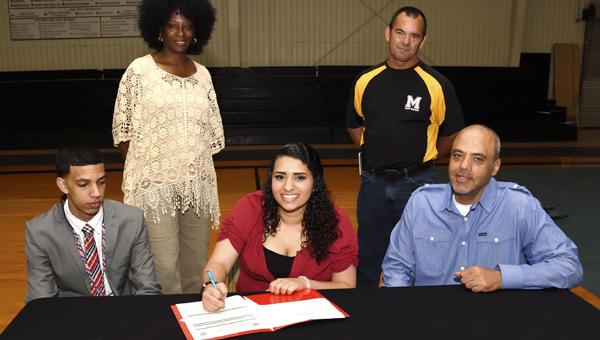 Dabit signed with Wallace Community College Selma Monday and will play volleyball with the Patriots the next two years. She signed with her dad Zuher and her brother Sam by her side, but many of her friends also sat in the bleachers, cheering her on.

“I didn’t really expect to do it in front of the entire school,” Dabit said. “I’m not used to being the center of attention.”

During her career with the Trojans, Dabit helped lead the team to state tournament appearances in the Alabama Christian Athletic Association the last two years.

Last week, she received a phone call from Wallace coach April Harper, asking her to come participate in a practice with the team. Dabit, who was at a Meadowview softball practice at the time, left quickly to get to Wallace.

She said she already felt comfortable there because she attended almost all of the Patriots’ home volleyball games this past year, but practicing with the Patriots helped ease any concerns she had.

“Their team was really nice and they all made me feel like I was part of the team already,” Dabit said.

Harper said Dabit had no issues keeping up during her teams’ full speed practice. She said it’s always rewarding to find a local athlete that can play at Wallace.

“Christina is an impact player and that’s what I’m looking for,” Harper said. “She can play right now at the next level.”

Meadowview Christian head coach Tim Burton said Dabit was one of the biggest leaders for the Trojans the last few years.

“She never really gets down,” Burton saud. “She’s always the same, win or lose or draw. She keeps the same atmosphere around her and she expects everyone else to step up the same way.”

Burton said he knew Dabit was a special player during her tenth grade year when she learned the correct way to serve. As a result, serving became one of the strengths of her game.

“I could tell then she had enough sense to pick it up,” Burton said. “I try to teach a lot of girls to serve that way but only a few of them pick it up.”

Dabit, who plans to be a pediatrician, said she’s happy to be staying close to home to start her time in college.

“I’m going to save so much money,” Dabit said of going to a college in Selma. “Because I’m going to be in school for the next 11 years of my life.”