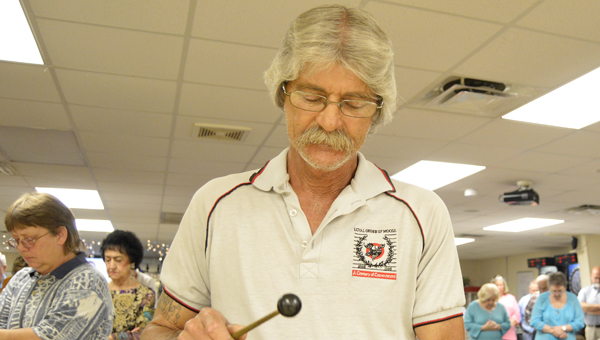 Order of the Moose Junior Gov. Robert McCloud rings a chime meant to signal the beginning of prayer. The donations collected are used toward charities founded by the organization as well as local charities. –Emily Enfinger

Bags of cat and dog food in addition to cans of beans, soups and fruits were stacked high on tables at the Loyal Order of Moose Lodge Monday night. After a month of collecting cash and non-perishables, the lodge made donations to various local charities during a dinner that also featured a special guest appearance.

The Loyal Order of Moose is an international organization consisting of more than one million members in more than 1,500 communities nationally and in areas of Canada, Great Britain and Bermuda, according to the organization’s website. While the Moose focus on Mooseheart and Moosehaven, two charities founded by the fraternity, it spreads its good spirits and efforts to many charities and organizations.

The local lodge made food and cash donations to the Selma Area Food Bank and Selma Animal Shelter. The American Red Cross received a cash donation and 12 Tommy Moose dolls. Cash donations were also given to Kitchen’s Scholarship Fund.

The special guest of the evening was supreme Gov. Terry L. Walls. Originally from Oklahoma, he was elected chief presiding officer of the international organization in July 2015. Since then he has been on tour, visiting multiple lodges in each state.

He said Alabama is the 35th state he has visited since beginning the tour.

“They did some community service projects,” Walls said. “That’s what Moose do. We try to help out in our communities, and I’m here to be a part of that and to share it with them and to thank them for everything they did.”

He will be flying out of Birmingham for New Jersey on Thursday. He said during his tour he has noticed similarities between the different lodges and members.

American Red Cross executive director Kelly Hodges said the donations will be used toward helping fire victims by paying for lodging victims in hotels while they rebuild their lives. The dolls the American Red Cross was donated will be given children to comfort them.

“It allows us to be there for a family during their times of need,” Hodges said.

“It’s great. We can feed more dogs and cats now,” she said.

For more information about the fraternity, visit www.mooseintl.org.