Battle of Selma less than month away 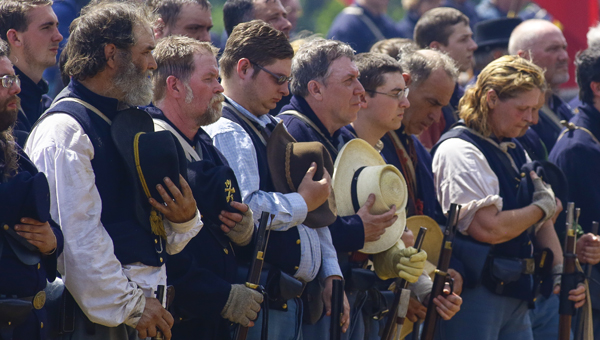 The 151st anniversary of the Battle of Selma will take place April 21-24. The battle annually brings in hundreds of reenactors each year.–File Photo

Since 1986, local and out-of-town history fanatics have congregated annually to reflect on the Battle of Selma with re-enactments and tours. The tradition will continue over a four-day weekend in late April for the 151st anniversary.

“You can hear about something in a book, but when you can actually reach out with your hand and touch and feel a uniform, for example, it just brings it alive,” said April of 1865 Society president James Hammonds.

The event will begin with Living History School Tours on both Thursday and Friday, April 21-22, at the Battlefield Park.

Hammonds said students from all over, even as far as Florida, will arrive into town for the school tours. Students will have the opportunity to learn about various aspects of the Civil War from military to civilian life.

At sundown Friday, re-enactors will provide an artillery demonstration.

Hammonds said it’s a completely different experience to see the demonstration at night as opposed to during a battle re-enactment or demonstration during the day.

“If you see them at night, it’s more kin to a firework show,” he said.

As soon as the demonstration comes to an end, re-enactors will put on their dancing shoes for the camp dance. Un-Reconstructed String Band, an independent group from Alabama with an interest in history, will provide live music and teach period dances.

The demonstration and dance are both free to the public.

At 9 a.m. Saturday, visitors are invited to tour Confederate, Union and civilian campsites. Admission is $7.

Later that afternoon, troops will prepare for a skirmish at 2 p.m.

Hammonds said the skirmish is not a re-enactment of a particular battle, but a full-size demonstration to show off different services and how they would have fought during that time.

Concluding Saturday’s events, the April of 1865 Society will host the Grand Military Ball for registered re-enactors and society members. Doors open at 7 p.m. at Sturdivant Hall. Guests are required to dress in 1860s formal attire.

A memorial service and history tour will be held the next morning at Old Live Oak Cemetery. Gates open at 9 a.m. for worship service. The memorial service and tour begins at 10:30 a.m. The tour will highlight several important figures of the war who are buried in the cemetery, including Confederate army Lt. Gen. William J. Hardee.

“When he was buried, there was an article in the New York Times that said it was the biggest funeral ever held in Selma,” Hammonds said.

At the battlegrounds, guests are invited back for food and shopping before the re-enactment of the Battle of Selma at 2 p.m. Admission is $7.

“Considering the time and space that we have to work with on our site, we try to get it as close to the Battle of Selma as we actually can,” Hammonds said.

He said although the event has been popular each year, it continues to rely on the support of the community. The four-day event provides an extra boost to the local economy as well as provides extra activities for residents.

“One of the reasons the Kiwanis Club brought this thing to life was to give people from out of town another reason to come see Selma,” he said. “To be successful, we need the local folks in Selma to come out and support us, like they have every year.”

He said last year the event brought in between 800-1000 people into town for the 150th anniversary.

Although this year isn’t a milestone anniversary, he still expects between 400-500 re-enactors to travel to Selma.