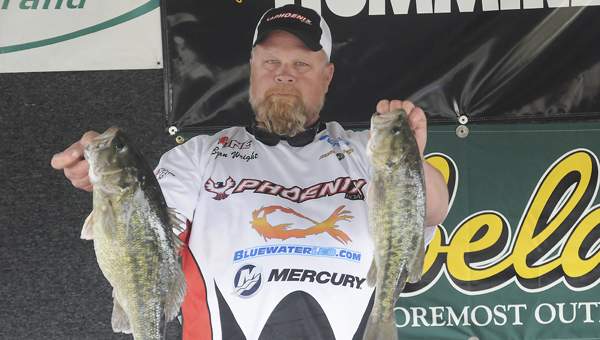 Bryan Wright, from Alexandria, stands with two fish he caught Saturday at the marina during the Alabama Bass Federation fishing tournament in Selma. — Justin Fedich

Sitting out in the Alabama River, Bryan Wright caught hold of a bass fish that he predicted weighed about seven-and-a-half pounds. As much as he tried to fight it into his boat, the fish swam away and took his bait that he’d been using for multiple weeks with it.

Luckily for Wright, he also caught a bass that weighed more than six pounds. That fish weighed in as the heaviest bass in the tournament, giving him the win for big fish.

Selma hosted the Alabama Bash Federation fishing tournament Saturday at the marina. There were over 40 anglers in the tournament, each competing for the heaviest group of five fish.

Rusty Borroughs, Alabama Bass Federation District 4 Director, won the tournament with a scale weight of 17.88 pounds for his five fish caught. For winning the competition, Borroughs collected a $1,900 check.

Borroughs, who is from Jacksonville, Alabama, said he too let a few bigger fish get away, but he still felt comfortable heading into the marina once he had finished fishing. He said there was no way to know if he had won the tournament, but he knew he had hit all the spots he wanted to during his time on the river.

“I’m just tickled to death to be in a position to say that I’ve won in this trail because there’s a lot of great fisherman,” Borroughs said.

Wright, who traveled from Alexandria, said he also had no idea he had caught a winning fish until he dropped it on the scale.

“You don’t ever know,” Wright said. “Usually with my luck, I’ve got someone upping me everytime.”

Wright, who is from Alexandria, said he was glad to redeem himself after not performing as well as he would have liked to on his home lake. When he saw 6.04 flash across the screen, he couldn’t stop smiling.

Wright said he caught the fish near the dam. Originally the fish had evaded him, but he didn’t give up. He took his boat back to that same spot, and the second time he was able to reel it in.

While a little bit of luck and a whole lot of experience contributed to Wright catching the winning fish, he said the formula for a victory is about the right mindset.

Wright said it’s tough to compete well if an angler goes into a tournament believing he won’t win.

“Nobody’s used to being on top. It’s so hard,” Wright said. “These guys are so good week in, week out. You go in hoping to win, expecting to win, but if you ever get the doubt in your mind, it’s over with. You’re not going to win.”

That number fell just over half a pound shy of Borroughs’ winning total.

Borroughs, who never misses a fishing tournament, said he loves competing in Selma on the Alabama River. He was impressed with how prepared the marina was for the tournament.

“I really enjoy fishing here. It’s a nice place,” Borroughs said. “And the people of Selma really did a great job cleaning the ramp up, fixing the bathroom facilities. They were great. We’ll come back again because there’s good fish here and the people really treated us well.”

Both Borroughs and Wright had opportunities to catch bigger fish throughout the day, but at the end of the day, they were glad to have caught the fish they did.

Wright might have let his seven-and-a-half foot fish squirm away, but he still was able to come out owned the biggest fish in the river when the competition came to a close.

“I didn’t have anything to lose, except fish,” Wright said.