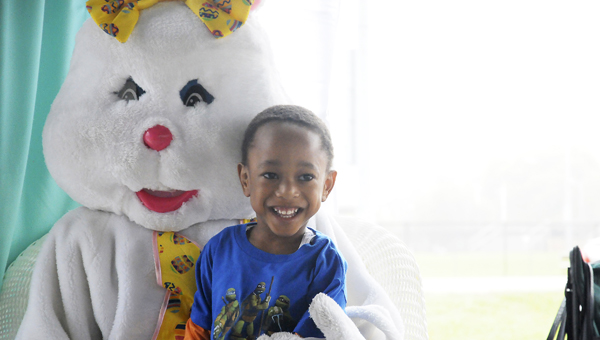 As Leslie Pettway called up a group of kids who had won the Easter egg hunt by finding the golden egg, she realized there was still one more golden egg hidden in Bloch Park.

Right as Pettway announced there was a golden egg on the loose, more than 100 children darted back out into the field, desperately searching for the final golden egg.

“I think we hid it too well,” said Easter Extravaganza co-coordinator Caren Kirtdoll.

When the egg hunt was over, six children — Brianna Allison, Kewillan Cook, Calvin Craig Jr., Raylan Sheehan and Celia Watts — all took home a gift basket prize of toys and candy for finding the golden egg. 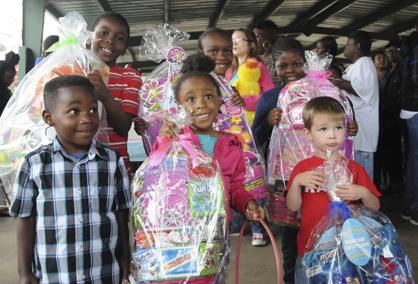 There wasn’t much for a kid to dislike at the third annual Selma Easter Extravaganza at Bloch Park Saturday. No matter how many eggs each kid collected, each child left with a smile.

The morning opened with pictures with the Easter bunny, which attracted a line that stretched the length of the Farmer’s Market pavilion. After pictures, the hunt began.

Childen aged 4-7 lined up on one end of the park, and children aged 8-12 lined up on the other end. When the word “go” echoed from the megaphone, the kids scampered through the field, having no trouble finding eggs that were littered throughout their path.

“My favorite part is seeing everybody arrive and the excitement, the anticipation, just seeing the kids running out there and getting their Easter egg,” Kirtdoll said.

Within a few minutes, nearly every egg had been collected, and the kids giggled their way back to the pavilion with full baskets of eggs.

Cook, one of the winners of the Easter egg hunt, had a basket full of fun prizes for him to enjoy, but he had a better idea.

“I’m going to give it to my cousin,” Cook said.

Pettway started the Easter Extravaganza two years ago, and she said it has grown in participation each year. Kirtdoll is in her first year coordinating the event. It brought her joy to see so many families show up.

“We really just did this for the families of Selma,” Kirtdoll said. “We want people to have events to come to here in Selma. We don’t want them to feel like they have to go out of town to experience an Easter egg hunt or a family fun day or a festival. They can experience that here in Selma.”

While every child was able to find the Easter eggs with ease, it’s not an Easter egg hunt if there’s not one egg that is hard to locate.

The final golden egg that took a while to find seemed like an oversight, but Pettway said it was all part of the plans.

“We want them to have a challenge in looking for it,” Pettway said. “Every year we’ve had people not find a golden egg, so it makes it fun to let them know that there’s something else still out there.”