Final preparations being made for Johnson camp 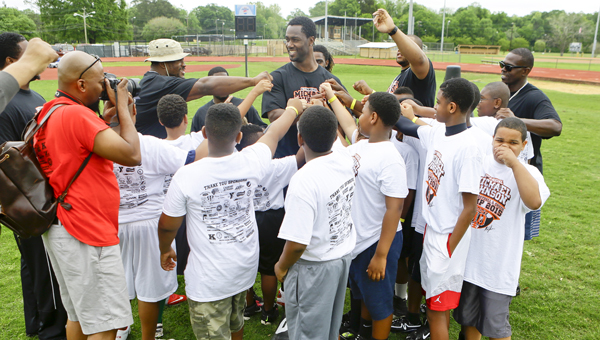 NFL player Michael Johnson will return to Selma for his Youth Football and Cheer Camp on April 15 at Memorial Stadium.

Johnson, who grew up in Selma and graduated from Dallas County High School, plays for the Cincinnati Bengals, but he also comes back to his hometown regularly. One of his annual events is the football and cheer camp, which teaches area youth new techniques and also gives them a chance to interact with the NFL star.

“He knows that the youth of today is our future,” said Thomasene Johnson, Michael’s morhter. “He wants them to be the best they can be so he works on raising leaders and people who will give back to the community in the future.”

Thomasene is in charge of coordinating the camp each year. She said boys will learn basic football fundamentals and she wants the children to take advantage of what the coaches have to offer.

“I want them to learn as many skills as they can but also have fun. I think it is important that the children interact with professionals,” Thomasene said.

“I know it is something they don’t usually get a chance to do.”

She said the camp teaches skills children may not have and helps them sharpen the talents they already possess.

“We’re pleased with the way the camp affects the community,” Thomasene said. “This year, I expect the camp to be even better than the last. I strive to make each year better than the year before.”

Thomasene has seen the number of little league football teams in the area almost double since the camp first started. She said between 200 to 300 children register for the camp each year and she expects a bigger turnout this time around. The registration fee for all children is $20. People who register on the day of the camp will be charged an extra $5.

Ayla Goodson will coach the cheer and dance portion of the camp for the second straight year. She has been dancing since she was six and is now the CEO and Founder of Gemini Studioz in Mobile.

She said she looks forward to the camp and is glad she can help young girls of the community work on their craft.

“It is an opportunity to mentor to the girls,” Goodson said. “The camp teaches them about the foundation on cheerleading and dance. They learn that when they perform, they are looked at as motivators, to themselves, their teams and their fans.”

She said she is going to do things a bit different this time. Last year, girls learned a cheer and a dance. Goodson said a lot of them were asking to learn stunts so she decided to incorporate a few into routines this year.

Registration is ongoing on the Michael Johnson Foundation’s website at www.mj93.org.