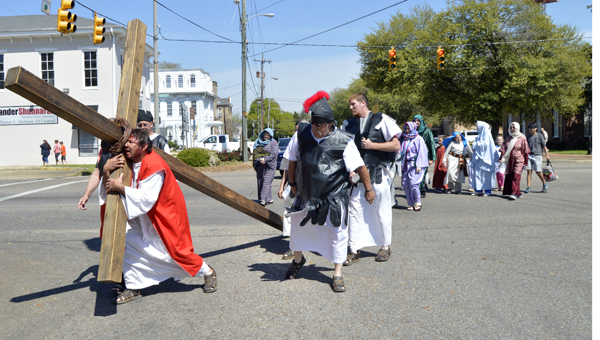 Members of several local churches participated in the 25th annual Walk to Calvary, a re-enactment of Jesus’ journey to the cross.

“He’s not our king. Crucify him,” re-enactors yelled toward the men depicting Roman soldiers. Others cried and clung to each other as supporters for Christ.

“We do this purposely for the citizens of Selma and the people passing through. They can dwell on the real meaning of Easter,” said Gateway Baptist Church pastor Robert Walker. “It’s not about the bunnies and rabbits and the candy eggs and all that stuff. It’s about Christ dying for the sin of mankind and staying in the grave for three days and then he rose.”

On Thursday, the re-enactment began with the Lord’s Supper at City Hall at 7 p.m.

The re-enactment continued Friday at 2 p.m. outside City Hall to depict Jesus’ trial.

Tied to a pillar, Leroy Chisenall Jr. depicted the role of Jesus.

As the trial concluded, reenactors depicting Roman soldiers helped lift a wooden cross onto Chisenall’s shoulders. From there, police escorted them as they walked from City Hall down Dallas Avenue toward Bloch Park.

Since the early 1990s, Gateway Baptist Church has been organizing the re-enactment with other local churches.

Walker said the idea was instilled in Rob Rochester of Cornerstone Church during a Christmas parade.

“The spirit of the Lord spoke to brother Rod Rochester and said, ‘I want somebody to put the cross in the street,’” he said. “We started the very next year.”

Walker said the re-enactment is unique for the area and wishes it had a larger presence in the South.

“We would like this to be one of the biggest events that happens in the Southeast,” he said.

While some participated in the re-enactment to help share the message of Christ, others participated to also bring themselves closer to God.

Bryan McCormick of Crosspoint Christian Church played the role of the penitent thief, tied to the cross on the left of Jesus.

He said participating in the reenactment was an emotional and uplifting experience for him.

“I cried the whole time I was up there,” he said.

McCormick said he was released from prison in July and was recently saved.

“It’s been a wonderful experience. There’s nothing like it,” he said. “There’s no drug in the world that can get you this high and be legal and keep you out of trouble.”

He said his life has completely changed since he has been saved.

“I was on the road to destruction,” he said. “But when people see me now they can say, ‘he’s not a thief and a druggie.’”

Once re-enactors made their way to the park, they approached two other wooden crosses in the field. Roman soldiers guided the depicted Jesus between the two crosses where he was then tied to his cross and lifted upright.

Curious watchers at the park gathered to get a closer watch as reenactors yelled and cried.

The reenactment for the crucifixion concluded in prayer.

It will resume Sunday morning at 7 a.m. for the depiction of the resurrection at Bloch Park.