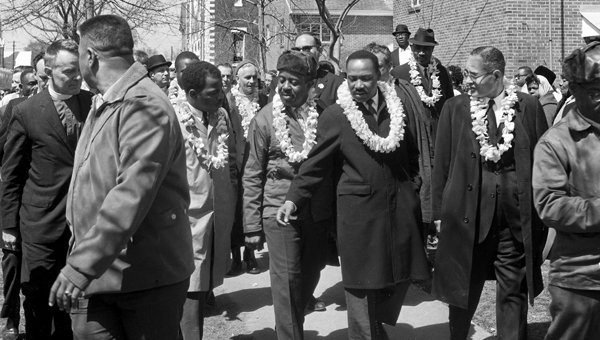 John Lewis, Ralph Abernathy, Martin Luther King and Ralph Bunche are shown in this recently discovered photo from The Huntsville Times archives. The photo was taken on March 21, 1965, the day the Selma to Montgomery march started.

The Huntsville Times photographer Bob Gathany recently stumbled across photos from the 1965 Alabama Civil Rights March in the newspaper’s archives.

Photographer William McCormick, who worked for The Huntsville Times during the civil rights era, took the photos.

“I knew they were historically significant when I saw them. We have been going through the archives looking for things from the past we could use in stories. We’re finding a lot of historical events,” Gathany said.

Once he found the picture negatives, he scanned them so he could see what the images were and realized he had run across something that was one-of-a-kind. He thought readers of The Huntsville Times would appreciate them, so he wrote a story giving background information on McCormick and published a digital slideshow of the pictures.

Among those pictured were Martin Luther King Jr., John Lewis, and Ralph Abernathy as they led the historic march from Selma to Montgomery.

“There is a lot of interest in this. After I posted the story online, there was a lot of response. Many people sent me emails thanking me for posting the photographs so they could see them,” Gathany said.

He said it was interesting to find something that had been hidden for years and share it with others.

“At this point these are probably the most historical photographs that we have found in our archives. I was really surprised to find photo negatives from 1965 because our records have usually only went back to 1975,” Gathany said.

The Huntsville Times has not decided what it will do with the photographs beyond the slideshow it put online Monday. Gathany said he has asked readers to help identify people in the pictures. He said he has gotten a few responses since then.

Gathany, who has been a photographer with the Huntsville Times for 15 years, said he favors McCormick’s work and gained a great interest in photography from his grandmother who was a photographer in the early 1900s.

“I’ve always been interested in the history of the photography. It’s really cool,” Gathany said.