George Arthur Edwards Jr., classically trained vocalist and instructor at Ellwood Christian Academy, will be traveling to Medellin, Colombia with his musical group 105 Voices of History this weekend. 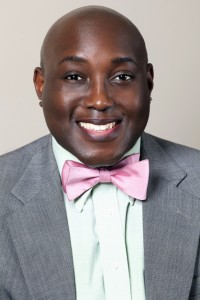 Edwards said he auditioned for the group two years ago. He said to be accepted, a signer must have a recommendation from a director at a Historically Black College or University.

“There is an audition process to be submitted into the group,” Edwards said.

Edwards’ choir director Dr. Horace Carney encouraged him to join the group during his studies at Alabama Agricultural and Mechanical University.

The group does musical tributes of many genres of American music and performs around the world. This trip will mark Edwards’ second to Colombia.

“It’s beautiful there. The people are nice and I learned a lot about the culture,” Edwards said.

He said the group toured neighboring cities and sang at malls, universities and other public places.

105 Voices of History has also traveled to the Bahamas and many U.S. states as well as Washington, D.C.

“It’s called the 105 Voices of History because of the 105 historically black colleges and universities in America. We work to boost the morale of HBCUs. We basically want to educate the world about the diverse talent produced at these institutions and share African-American music,” Edwards said.

The group also focuses on leadership and host camps annually in Atlanta and Washington D.C. Edwards said he enjoys being a member of the group and being able to touch people everywhere with his musical talents.

“It gives me a sense of purpose and confidence. I think it’s important for everyone to find their dream and find out where we can be of use. I love sharing my gift. It’s always a good thing to be able to put a smile on someone else’s face or lift their hearts through song,” Edwards said.

He said that something else he enjoys is meeting and networking with new people and other artists. Edwards said he believes being able to travel is a cultural privilege and said it provides a life experience from a different perspective that might not have been considered otherwise.

105 Voices of History will leave Sunday and return on April 4.