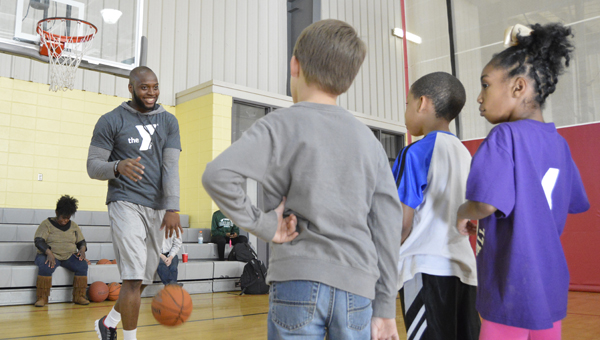 “It’s a nice program. It gives them a lot of exercise and she’s enjoying it,” said Evans’ grandmother, Naomi Chappell.

During the month of March, the YMCA has held “Drills and Skills,” an hour-long class teaching children the basketball basics each Monday from 4:30-5:30 p.m. By popular demand, the program will be extended into April.

“They’ve been having a blast. Selma is a basketball town and these kids want to play all year round,” YMCA executive director Ann Murray said. “We wanted to extend the opportunity for children to play.”

The program is free for existing club members and $5 for non-members. Scholarships are also available.

Fitness coordinator Darion Alexander said the kids learn everything from playing on the court to eating healthy. The class begins with warm ups and drills. Toward the end of class students are given time for free play to practice their new skills. Afterward, students have a chance to break with a healthy snack.

Alexander believes the program is a good outlet to boost the children’s morale.

“I really think this program is important just to uplift their spirit and to give them a little confidence,” he said.

Edwin Thornton’s 7-year-old son, Cren, is active in multiple sports including motocross and baseball, but is trying out basketball for the first time with the program.

“It’s something good for kids to do after school. It teaches them structure, it gives them something to do and later in life they might be a basketball player. You never know,” Edwin said.

Cren and Jaterious Levins, 8, said they both enjoy shooting hoops the most. Cren said dribbling has been the most challenging skill for him to work on so far.

James Henderson, 8, said shooting is the most challenging for him, but has learned a lot since joining. He said he enjoys the free time the most.

In addition to learning new skills, the program allows the children to be around other students who they may not attend regular school with and to develop new friendships.

Evans said she has made many new friends and learned new skills since beginning the program. Her favorite thing is to dribble and she plans on continuing to play basketball in the future.