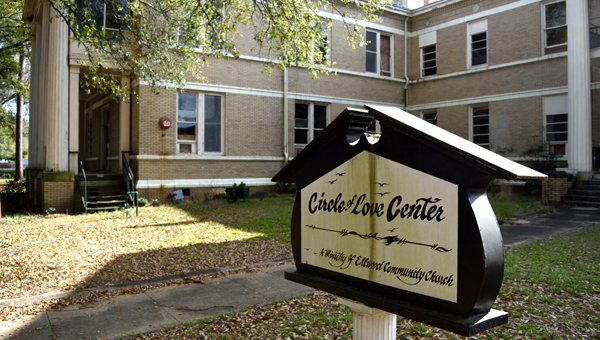 The old Dunn Nursing Home, which is now owned by the Circle of Love, will be auctioned off next month by the IRS.

The Internal Revenue Service has seized the Circle of Love Center building on Mabry Street and will hold a public auction next month.

The building was seized due to the nonpayment of IRS taxes due from Ellwood Community Church, according to a legal notice that published in Wednesday’s edition of the Times-Journal. Pastor Gary Crum said the building is owned by Circle of Love Outreach, which he helped start in 2002.

“A lot of times as the scripture says you’ve got to count the cost,” Crum said. “Unfortunately, that’s one thing that could’ve been a bright spot in the community, but it escaped us, but we’ll keep praying that something else will come to fruition.”

In 2004, the group purchased what was then the Dunn Nursing Home, located at 515 Mabry Street, with plans to turn it into a homeless shelter, Crum said. The building was renamed Circle of Love and several renovations were completed, but Crum said it didn’t take long for the group to realize a lot more work would have to be done.

Crum said the building had old elevators and needed a new roof.

“It’s so old and to bring it up to code would’ve been extremely expensive,” Crum said.

The center hasn’t hosted tenants for much of the time Circle of Love owned the building. Crum said following Hurricane Katrina the building opened up as a shelter for an estimated 40 families, but Crum said that only lasted a short period of time.

A short time later, the building was used to house Wallace Community College Selma students. Crum said around 15 students lived in the home at that time.

Since then, Crum said the building has been vacant.

“It wasn’t generating income,” Crum said. “It was just sitting there.”

Crum said the building was put up for sale for years and had generated interest from one gentleman, who was interested in turning it back into an assisted living facility. Crum said the sale was based on a historic tax credit program that was eliminated while talks were ongoing.

“That put a halt to that,” Crum said. “We had plans drawn up, folks coming in to look at it and to put the plans together and all.”

A group named Circle of Love is also interested in acquiring the Brown YMCA building, but Crum said it’s an entirely different group. He said the two groups have different boards.