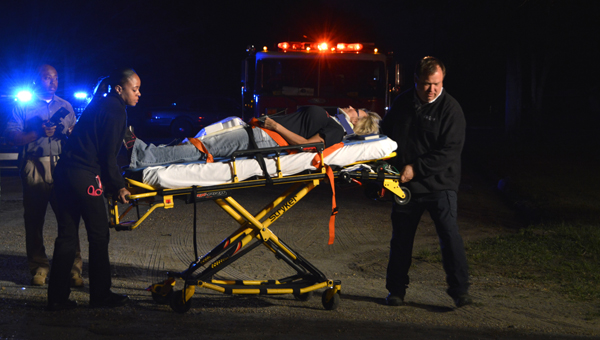 During training Tuesday at the Alabama Police Academy, CARE Ambulance paramedics transport actor Lisa Giles from the scene of a mock accident.

As soon as the sun disappeared behind the horizon, blue and red lights and the sounds of sirens filled Craig Field Tuesday night.

With wrecked cars provided by Al’s Towing and Recovery, four crash scenes were staged to give students a vivid experience of real world situations.

“They’ll get accustomed to the sights, the smells, the sounds,” said class coordinator Senior Trooper Dan Fells. “Most of these guys are going into night shift anyway, so we do it at night so we can put it as close to reality as possible.”

The staged accidents taught officers have to respond to injuries as well as fatalities. At one scene, a man was trapped into an overturned vehicle that was T-boned by an SUV.

Another scenario depicted a single vehicle crash into a ditch where the driver left the scene.

“They get training, the students get training and it’s basically a win-win for multiple agencies to do one training session,” Fells said.

During onc scenario, firemen had to cut and lift the top off a vehicle to safely secure the accident victim.

Student officers are taught to process, clear and properly investigate a crash. They are also taught how to work with other agencies and how to deal with victims’ families, friends and accident spectators.

“We don’t teach them to show up and get names and numbers,” said Senior Trooper Reginal King. “By the time they’re done they should know what the contributing circumstances of these crashes are, what caused these crashes.”