“The fact that he was somebody well known to be armed and dangerous, we’re glad he’s locked up,” said District Attorney Michael Jackson.

Parnell was received at the Jefferson County Jail just before 1 p.m. with no bond on a capital murder charge, according to AL.com.

He is suspected for shooting 18-year-old Maliek McBride during a robbery on the 1200 block of 12th Court North in Birmingham after 7:30 p.m. on Monday, March 14, according to AL.com.

Lt. Sam Miller of the Selma Police Department said U.S. Marshals found Parnell under a bed in a Birmingham apartment. 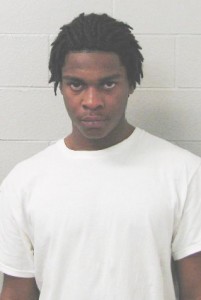 He is wanted for murder by Selma Police in connection with the death of Antoine Stallworth in late December.

Investigators believe the events began when Parnell’s brother, Eric, was shot in the back in the 2100 block of Church Street on Dec. 30.

In connection to Eric’s shooting, Clarence Brenson, Glentravious Olds, Frederick Turner and Antonio Whatley have been charged with attempted murder.

Hours after the first shooting, Nikki Olds was shot in the arm on Tucker Avenue.

Whatley’s mother, Mary, was shot and killed on New Year’s Eve when leaving her home that afternoon in the 1600 block of Maple Street in Selmont.

Nearly an hour later, Stallworth was shot in the crossfire of Olds and Parnell at GWC Homes in Selma.

Jackson said because he is charged with capital murder in Birmingham, Selma authorities will have to wait to prosecute.

“With it being capital, he has more serious charges in Birmingham. He will be facing the death penalty or life without parole,” he said. “At some point he will be coming back to Dallas County and we will prosecute to the fullest extent of the law.”

Jackson believes the victims, families and citizens of Selma will be relieved to know all suspects involved with the New Year’s shootings are finally in custody.

“Of course that’s a welcome relief to the community that we get all these gunslingers off the streets,” he said.