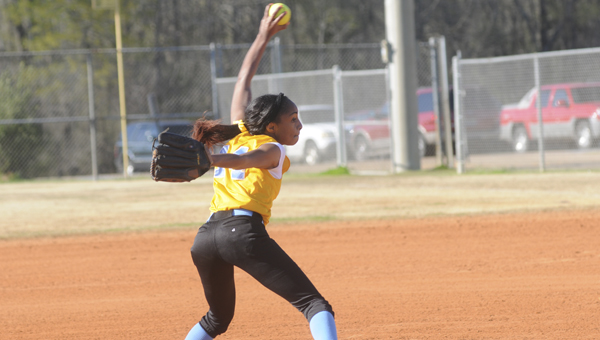 Selma pitcher Dajah Thrash tosses a pitch during the Saints’ game against Chilton County Tuesday at the Sportsplex. The Saints lost 7-1. — Justin Fedich

The Selma Saints softball team looked like an even match for the Chilton County Tigers for the first four innings, but the Saints were unable to hang with the Tigers down the stretch.

Selma (4-3) dropped to Chilton County 7-1 Tuesday at the Sportsplex. The Saints scored the first run of the game, but then allowed Chilton to finish the game on a 7-0 run.

“Overall, they played a great game today. Defensively, we were where we need to be. We had a few errors, but really not many. We had great catches, we just couldn’t get around to hitting the ball,” said Selma head coach Jameria Johnson.

Neither team had a strong offensive start to the game. In the first two innings, the Saints were done in three batters. Meanwhile, Selma pitcher Daja Thrash kept the Chilton County batters from reaching home in each of the first three innings.

D’Asia Lewis scored for Selma in the third inning, when a throw from the catcher got past the third baseman.

That was the only run Selma scored all game. Chilton County tied the game 1-1 with an RBI in the bottom of the fourth inning.

Alaysha Manuel stopped the Tigers from putting any more runs on the board when she snared a line drive at second base for the third out.

In the top of the fifth inning, Thrash walked a batter with bases loaded to give Chilton County a 2-1 advantage. The next batter cracked a three-run RBI, and Chilton County led 5-1.

In the bottom of the fifth inning, Thrash hit a double aided by a Chilton County error, but the rest of the Selma bats went quiet to keep the score at 5-1.

Thrash stayed on the mound in the sixth inning and kept the Tigers from scoring.

“She got frustrated for a little while, but she came back on her own,” Johnson said. “I didn’t even have to talk to her.”

To lead off the bottom of the sixth inning, Charmekia Moore drove a hit over the left fielder for a double.

Selma failed to convert with runs, however.

Two more Chilton County players scored to give the Tigers a six-run victory.

Despite the loss, Johnson said she saw her team compete better than they had in past games this season.

“It was a much better game today, but we just really need to work offensively on hitting the ball quicker,” Johnson said.