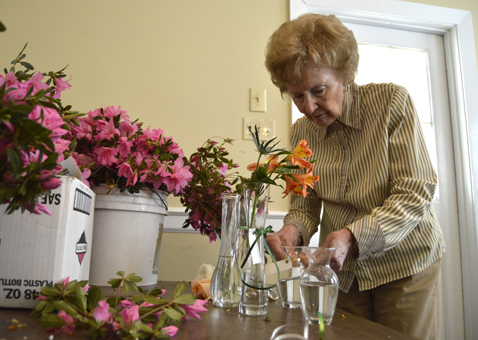 In a back room of the Selma Country Club filled with azaleas and roses, Elkdale Garden Club members assembled bouquets Tuesday for nursing home and hospital patients. The group has been distributing flowers for nearly 20 years, but is constantly thinking of new ways to beautify the community.

The club’s newest venture is to promote beautification within the city of Selma by promoting “Yard of the Month,” a friendly competition to encourage residents to take pride in their yards.

“We are so involved in the community,” club president Carol (Carrie) Lewellen said. “We don’t just meet and have a social hour.”

The recognition is open to everyone, both club members and non-members. In order to participate, the yard must be nominated or selected by the club’s committee.

Each month a new yard will be selected and a Yard of the Month plaque will be placed at the home. Once it starts the second week of April, the recognition will continue throughout the year.

Lewellen said the idea came from another club member, Hazel Williams. While visiting her son in Atlanta, Williams noticed several Yard of the Month signs throughout town.

“We thought that would be a good idea to try to promote the beautification of Selma,” Lewellen said. “We’re really excited about it.”

Several factors will be considered when choosing the Yard of the Month, but maintaining a clean, neat yard is primary.

Mayor George Evans believes the competition is good to boost morale and pride within the city.

“They want to be number one. It’s competitive,” Evans said.

Evans said it is important for the city to look clean to help promote tourism.

“When they see trash, litter and dilapidated houses and all like that, it doesn’t encourage them to come back. No one wants to visit a nasty city,” he said. “They want to visit cities that are clean and neat.”

Evans believes cleanliness can help visitors feel safer, knowing they are in a town of caring people.

“If it’s clean it means there’s no danger. It’s an indication that people care. If it’s nasty it can give the impression that people don’t care and it could be a dangerous environment,” he said.

Evans is glad the club has taken on the project. He said several other groups have done similar projects in the past, but it never took off. He believes the determination of the group will make the project successful.