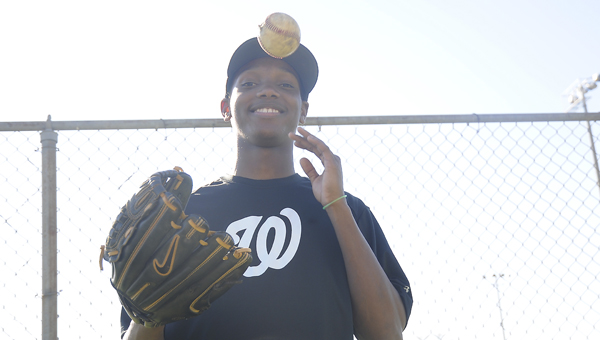 Last summer during a baseball game, Ron Sanders stood at center field, anxiously waiting for a chance to make a play. The batter crushed the pitch, and Sanders knew instantly he was going to need to sprint if he wanted to catch up with the ball.

As the ball sailed over his head, he reached his glove out over the center field fence, but he thought the opposing team had just hit a home run. To his surprise, the ball was sitting comfortably in his glove.

Sanders, a 15-year-old sophomore baseball player at Selma High School, has already made a name for himself on a team with nine seniors. Known for his speed and base-running intellect, Sanders proudly leads off the lineup, constantly trying to make a game-changing play.

“It makes you feel good when you know you’ve got that caliber of player that can come on the lead-off and get in a majority of time there,” said Selma head coach Burrell Bonner.

Bonner said Sanders leads the team in hits, RBIs and stolen bases, despite only being a sophomore. Sanders loves stealing bases because he craves the adrenaline rush and enjoys testing himself to see how quick he can react to the pitcher.

Senior teammate Desmond Williams said Sanders makes the game look “easy.” Perhaps it’s because baseball has been a part of Sanders’ life for more than a decade.

Sanders began playing baseball when he was 4 years old, and it soon became a positive outlet for him. Sanders needed to keep his grades up to stay on the team.

“This is something I can get away from to keep me out of trouble,” Sanders said.

Another motivating factor for Sanders has been his mother, Janelle Davis, who comes to every game. Out of all of Sanders’ supporters, no one believes in Sanders like she does.

“I like the feeling of looking up in the crowd and seeing my mom,” Sanders said.

While Sanders isn’t thinking too far into the future just yet, he said his mother thinks he has what it takes to play Major League Baseball. He might already have the arm for it.

Williams, who is Selma’s catcher, doesn’t have to look for the cutoff man when Sanders retrieves a ball from center field. Although Sanders isn’t the biggest player on the field, Williams said he can always count on a throw from center field to reach home plate.

While Sanders isn’t the most talkative player on the team, he isn’t afraid to raise his voice to let everyone know where he is most comfortable.

“The most he ever talks is on the baseball field,” Williams said.

Sanders sets the bar high for himself, but he understands at 15, he still has a long way to go. Right now, he’s just trying to make the small improvements, such as speeding up his swing and improving his reaction time.

As he’s adjusting his game, Sanders is still always looking to make the big play. Although he’s pitched and played all over the infield, he feels most at home in center field, where he’s waiting for a ball to fly over his head so he can do what he does best and chase it down.

“As long as he gets good grades and keeps his head on straight and doesn’t let anybody influence him and keeps working hard, you never know,” Burrell said.