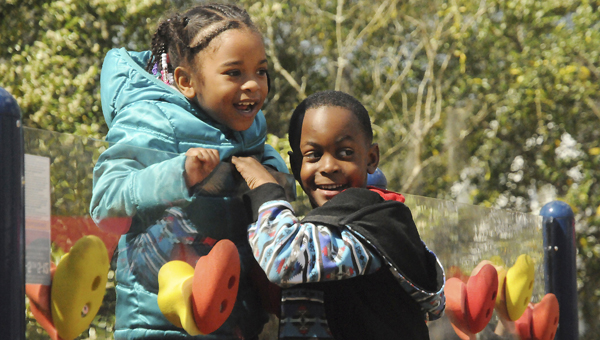 Dr. Carolyn Keasal took over as principal in fall 2014, when the transition had just been made to change Byrd Elementary School to a learning center catering to preschool kids only.

“When this was an elementary school, I understand they had some play equipment like swings and other stuff but they moved it in order to make preparations for pre-k,” Keasal said.

She said the change resulted in the preschool students having no play equipment. When she started, Keasal said they began building a playground piece by piece, adding new features as time went on.

As of January, the center now has a fully equipped playground. It includes a music wall, raised sandbox, rock climbing wall, slides and many other play stations and learning areas.

The cost of the new playground totals $54,000. Money was accumulated from a $10,000 dollar grant from Alabama Power and $44,000 in grants from the Office of School Readiness.

One of the most costly features of the playground is a poured-in-place surface. There is a 3-inch gravel based layer topped with a black rubber tar substance and finished with a green and black chipped rubber mix.

According to Keasal, it is recommended to be the safest option for children and is placed as the foundation of all playground areas. It is supposed to last at least 10 years and was $27,000.

“It’s really expensive, but it’s one of the top products sold. We won’t have to keep replacing it, and it is a better option than the loose wooden chips that most playgrounds have,” Keasal said.

She said she has plans to keep adding on to the playground to make it most fun and safe for the students.

Students Payton Melton, Ciara Carter and Trey King are all classmates and said they love recess.

“I like coming out here to play with my friends. My favorite thing to play with is the car steering wheel, ” Melton said.

Carter and King said their favorite part of the playground is the rock climbing wall.

Sharon Holcombe teaches the three children and said that she is glad they have a playground that is safe and they enjoy.

“I love this playground because it helps them to build on their motor skills. They can climb and jump. It has games where they can interact. They can use their imagination, and that is a big advantage,” Holcombe said.

Registration for the 2016-17 school year started in January. There are 176 spots available. A drawing on May 3 will determine which students are accepted into the center. So far, there have only been about 50 parents to complete registration.

To register, parents should come to the school, located at 625 Lapsley St. in Selma, to pick up an application.