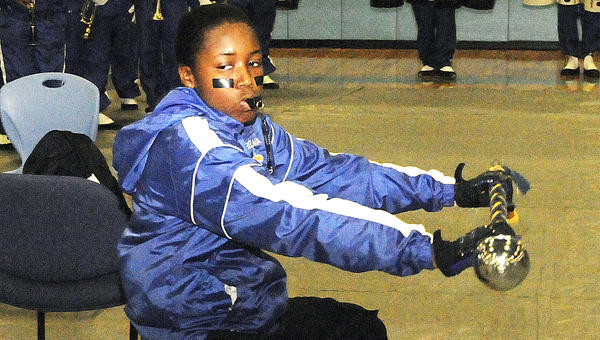 Admission was $3 per person and all proceeds were donated to the Muscular Dystrophy Association.   Selma High School Band Director Brandon Williams said he was eager to see the bands face off.

“My expectations for my band are for us to play well, be great entertainers and have fun. I want us to do a great job and represent the Selma City School System well,” Williams said.

He said he was confident Jefferson Davis would be good competition, but said he knew some of the things in his show were going to help the Saints stand out.

“They didn’t come from Montgomery to play games, but I am sure we will put on a great show. That’s the only thing I want is for us to compete well. I have some tricks up my sleeve,” Williams said.

The competition was solely for fun, but both teams took it very seriously.

Band Booster Member Leshonea Ellis said the band had been working hard for the battle, and she was proud proceeds would benefit the MDA.

“I feel like this will be a good competition and a real battle. I think the people who came out will get a good show. This is a good way for the students to have fun and a great way to give back,” Ellis said.

Both bands performed some of the latest R & B songs and popular dances. The dance teams, percussion lines and drum majors of both bands took turns showing their techniques. Nicole Terry traveled from Montgomery to support two of her children who are both Jefferson Davis band members.

“I’m looking forward to a good, clean show on the behalf of both schools. I’m expecting the battle to be entertaining and innovative. I think both communities, Selma and Montgomery, need more events like this,” Terry said.

“I’m not sure who will win because I haven’t seen Selma High play. However it goes, I’m hoping to get a good show,” Hordges said.

Selma High School Junior Kalimma Muhammad had never attended a band battle before Friday. She said she went because she felt like it was a good way for herself and her classmates to come together to support the band.

“I’m pretty sure we will have a good time, and I’m hoping for the Saints to do good. We have one of the best bands out there,” Muhummad said.