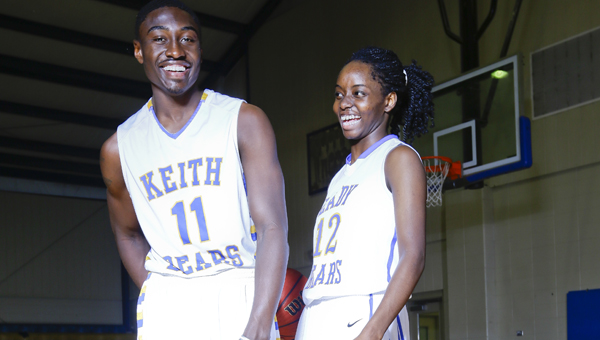 Keith’s John Pettway and Harriet Winchester pose for a picture before this season. Pettway and WInchester are first cousins and are also the Times-Journal’s Players of the Year.–File Photo

First cousins John Pettway and Harriet Winchester are the Times-Journal’s boys and girls basketball players of the year.

Pettway, a South Alabama commit,  averaged 23.7 points per game, 6.2 rebounds and 2.9 assists this season for the Bears.

“I’m very honored and thankful to be the county player of the year,” Pettway said. “It’s nice to have that opportunity and be able to seize it and to be able to be on top my last high school year.”

Winchester, a Troy University signee, has won the honor every time it’s been presented since her freshman season.

She averaged 17.7 points and 6.5 rebounds per game this season and is a Troy signee.

“It’s nice to know that my hard work is getting noticed still,” Winchester said.

Pettway said they have always tried to motivate one another to achieve more and have pushed each other’s games. He said it was “really cool” to be named the boys player of the year and to have Winchester receive the girls’ honor.

“That’s something we had always talked about, even when we were hanging out together and riding down the road,” Pettway said. “Not just records but accomplishments we had set for ourselves. To see that we accomplished so many things that we had already talked about is a great feeling.”

Each player is already looking forward to college. Winchester spent her Saturday on a campus tour at Troy, and Pettway said he’s already preparing himself for the challenges of playing basketball at South Alabama.

“I’m starting workouts and eating the right foods and drinking extra water. I’m getting my body prepared and my mind ready for the next level.”

The first cousins highlight the Times-Journal’s all-county teams for the 2015-2016 season, but they are just two of the many talented players that made the cut.

Winchester is joined on the girls team by teammate Zykia Pettway, who averaged 14 points and 10 rebounds per game for the Bears this season.

The two Bears are joined on the first team by Southside’s Kionah Page and Meadowview Christian’s Mallory Freine and Christina Dabit.

Johnson, a senior, averaged 10 points, 10 rebounds per game for Keith. Kemmer averaged 14.1 points, 3.2 rebounds and 4.2 assists for the Senators.

Price has numerous college offers and averaged 17.5 points, 12.5 rebounds and 2.9 assists per game for the Panthers this year.

McGuire averaged 16.6 points and 7.7 rebounds per game for the Trojans.