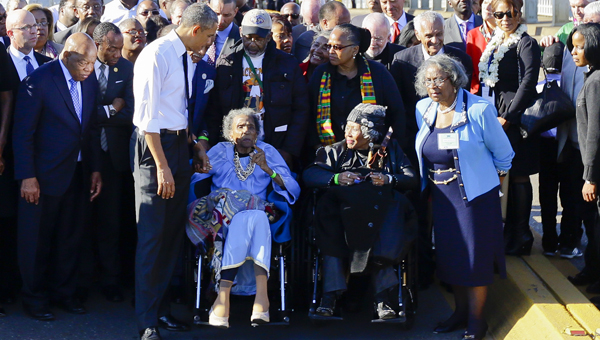 Amelia Boynton Robinson joins President Barack Obama during his walk over the Edmund Pettus Bridge during the 50th anniversary of Bloody Sunday in 2015. — File Photo

The country woke up the morning of March 8, 1965, to a photo of Boynton Robinson across the front pages of newspapers from coast to coast. The 53-year-old mother had been beaten unconscious during what is now known as Bloody Sunday.

That image and others of peaceful protestors being attacked by Alabama State Troopers and Sheriff Jim Clark’s deputies showed the world how serious the fight for voting rights had become and resulted in a groundswell of support for the Selma to Montgomery march and, eventually, passing of the Voting Rights Act of 1965.

“Amelia Boynton Robinson was known as the matriarch of the voting rights movement. Her life and legacy epitomized strength, resilience, perseverance and courage — the same characteristics that embody the city of Selma where she made such a significant impact,” Sewell said in a press release. “A warrior for what was right and a brave soldier in the fight, Amelia Boynton Robinson was a champion in the movement that led to the passage of the Voting Rights Act of 1965.”

Boynton Robinson was born Aug. 18, 1911, in Savannah, Georgia to George and Anna Platts. She was one of 10 children and started campaigning for women’s suffrage at an early age, working with her mother to hand out voting information to women from their horse and buggy in 1920.

After graduating from Tuskegee Institute (now Tuskegee University), she moved to Selma with her husband Sam, settling in a home on Lapsley Street. A registered voter since 1932, she fought to make sure everyone had the same right to participate in the political process.

After Sam’s death in 1963, Boynton Robinson continued fighting for the cause and was one of the Courageous Eight, who invited Martin Luther King Jr. and the Southern Christian Leadership Conference to Selma.

In 1964, Boynton Robinson became the first black woman to run for Congress in Alabama. She garnered 10 percent of the votes at a time when only 1 percent of the voting population was made up of African Americans.

Almost five months to the day after being beaten on the Edmund Pettus Bridge, Boynton Robinson was invited to Washington, D.C. to see President Lyndon B. Johnson sign the Voting Rights Act on Aug. 6, 1965, giving everyone, regardless of their skin color, the right to vote.

“I know the journey I now take in Congress was only made possible because of her courage, tenacity and faith.  As a daughter of Selma, I am honored to sponsor this legislation, and I can think of no more deserving person to name the Selma post office than Amelia Boynton Robinson since she represents the heart, spirit and essence of Selma,” Sewell said.

Funeral services were held in Selma and Tuskegee and her ashes were spread beneath the Edmund Pettus Bridge after a final bridge crossing.

Her surviving son, Bruce Boynton was delighted by the news of the legislation.

“My mother fought for the rights of black people since the 1930s and both my mother and my father were hardly recognized for everything they’ve done. My mother would have been very happy to receive this honor,” Boynton said.

“Amelia Boynton Robinson put herself and her family’s lives at risk and this is a long overdue honor, and I am in support of naming the post office after her,” Evans said.