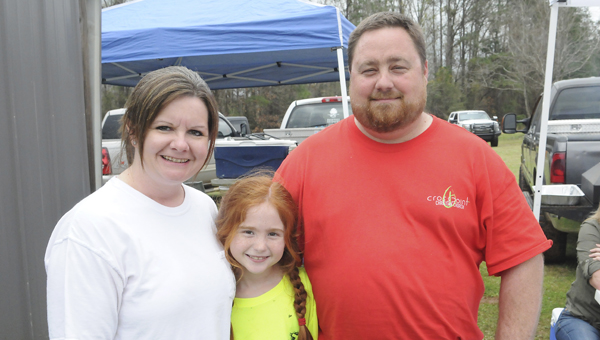 Kim and Frank Reynolds never thought they would adopt a child. They’re now in the process of adopting two.

Through a ministry called Bridges of Faith, a volunteer organization that works to bring groups of Ukrainian orphans to a 140-acre retreat center in Chilton County, Frank, Kim and their daughter Emily found two new members of their family.

They made a connection with Estella and Zlata, 15 and 14-year-old sisters from Ukraine, and Frank and Kim both said the desire to adopt was mutual.

“Is there any certain family that you really liked or you fell in love with that you think you would want to live with?” Frank said the Ukrainian sisters were asked.

Frank said the first names the girls said were the Reynolds. It was a blessing for Frank and his family, because their first choice was to adopt Estella and Ziata.

“God led us to adopt these two young ladies,” Kim said. “And it just unfolded and everything fell in place, and my friends have jumped on board and it’s amazing.”

The Reynolds and the sisters from Ukraine met on Christmas Day in 2015. Two weeks later, Kim and Frank made the decision to adopt them. Now, they are in the process of raising $30,000 so they can make it official.

To raise money, they’ve planned to sell concessions at the Dallas County Horse Show, hold a spaghetti dinner at their church, host a golf tournament and have a skate night.

The Reynolds initially felt the need to help out when they learned that the future of many Ukrainian orphans is not bright. According to the Reynolds, suicide and imprisonment are common.

Knowing those facts, the Reynolds felt they had to step in and make a difference, if only in a small way.

Kim said Estella and Zlata have a feeling that they have been chosen for adoption by the Reynolds, but they have not been told yet. Kim, Frank and Emily are looking forward to the day when they can reach the girls via Skype and tell them they are going to be a part of their family.

It wasn’t originally in the plans for Kim and Frank to adopt one, let alone two, children. But they couldn’t be more excited for the future.

“We knew that we were led to help, but we didn’t really know how and this it just clearly was what we needed to do,” Kim said.